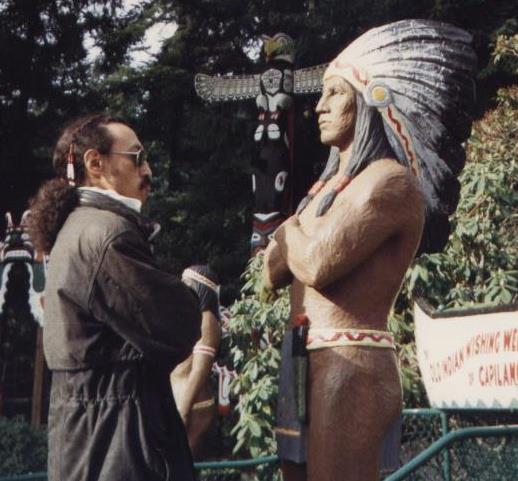 This reminiscence — more bitter than sweet — is reprinted with Solomon’s permission from Arok Wolvengrey’s 2007 wawiyatâcimowinisa / Funny Little Stories Narrated by Cree-speaking students, instructors and Elders. The book, which contains about a dozen first-hand stories in Cree, can be purchased from Canadian Plains Research Centre. This story is written in Solomon’s Woods Cree (th-) dialect. Complete recording details appear at the end of this post.

Long ago when I was a child we used to go to school over here, over there in Prince Albert was where we attended school.  Every year we’d start in September, we’d go off to attend school there at the “residential schools” as they were called.  That’s where we went, it was called Prince Albert Indian Student Residences, that’s what it was called.  And while there the children used to be really desolate and they used to really cry for their parents, missing them a great deal.

Well, we also used to have a great deal of fun every time Saturday came around for at that time we used to watch, uh, movies, we used to call them “picture shows”.  Those were the ones, we really used to have fun when we finished watching them for we’d go and play outside just like we were, well, we used to play “Pirates” and also “Cowboys and Indians”.  That’s how we used to play, and at that time as we were growing up we really used to, uh … we had a very poor opinion of ourselves.  We used to be told that we shouldn’t live like Cree people, that’s the way we were raised there at that school.

On February 13, 2006, Linguistics student Jacyntha Laviolette recorded Cree professor Solomon Ratt as he told, in the Woods Cree dialect, this story from his residential school experiences.  Jacyntha then began the transcription and translation of the text as a project for the CREE 411 (Seminar in Cree Morphology) course taught by Arok Wolvengrey in the Winter term of 2006 at the First Nations University of Canada.

Arok Wolvengrey, with the help of Jean Okimāsis, then sought to complete the work on the text, before turning to the ultimate authority, Solomon himself, who filled in the final details which had escaped those less familiar with Woods Cree.