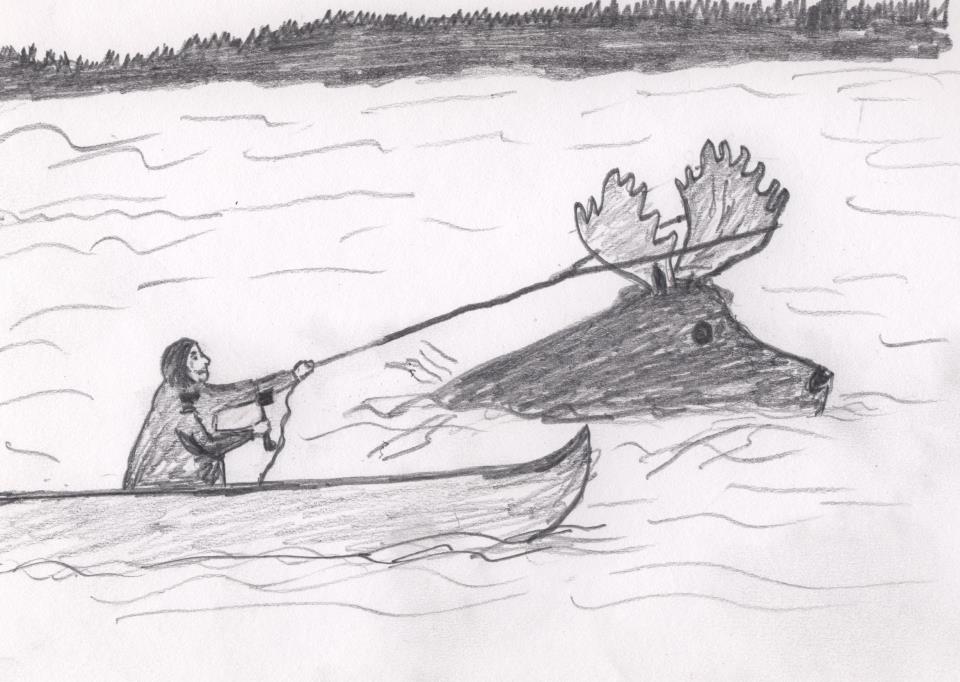 This story is taken from “A Woods Cree Grammar and Workbook” by Solomon Ratt, and published here with his permission. (Thanks, Solomon!)

I love this story because it has elements of “urban myth” — in a Cree sort of way. I’m trying to remember where I read a *real* story like this — maybe in the stories of Ellen Smallboy (gathered in the 1930s). In that story, the mother or grandmother canoed up behind a swimming deer, and killed it with a sharpened pole (a fish net stake, which she would have had in the canoe anyway), shoving the stake up its anus and rupturing its inner organs. I don’t know if they named the location after her, but the hungry family appreciated the venison.

In other words, the core of the story is probably true (a granny survived alone and they named a bay after her), but the details are far too big to be real.

Another real story I’ve read (in Preston’s Cree Narrative, I think), talks about how hard it was for two men to haul a dead bear out of the lake after killing it in the water. A moose is much larger than that. Granny would have had to be Paul Bunyan to pull out a moose all by herself.

The axe thing also sounds suspiciously like 21st century thinking to me, compared to the stake that was witnessed to do the job. Those old-time kohkoms didn’t mess around! But Solomon says he was a little kid in the canoe (trying to get away) when relatives of his got a moose exactly this way. That’s pretty cool.

Thanks again, Solomon, for letting me share your story!