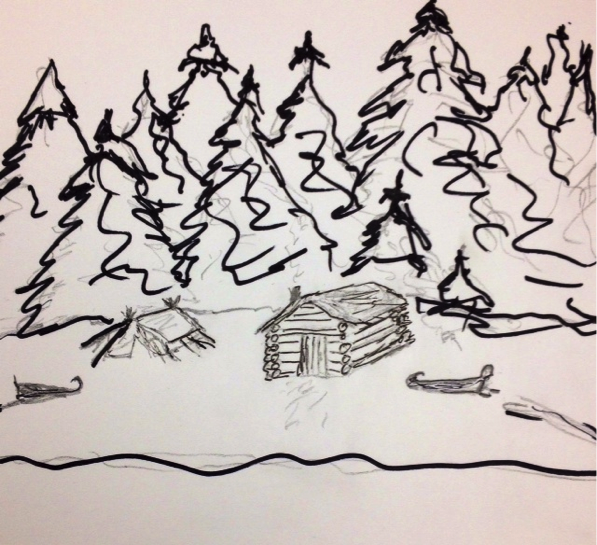 PrevBlown up, and 21 meters down, Buffalo Child Stone is sacred as ever.
Chapter One Making Introductions – Two Dialogues and Vocabulary from Solomon RattNext

Another original story written by Solomon Ratt in his own th-dialect Woods Cree (and translated into English).

Click the audio link to listen and read along!

The last time I visited my late mother she told me the story of the time I was born:

At that time it was freeze-up, during the Freeze up Moon (November) when my parents and their friends were travelling, they were travelling to the trapline. They were way out in the lake, driving a dog team when my late mother began labour, as she was with child, it was me she was carrying. She told my late father that she was going into labour, she was in the dogsled while my late father was driving the dog team.

Right away my late father calls his companions telling them that my late mother was going into labour. Immediately they drove their dog teams to shore. It was there to the north at the place where the current goes underground where they stopped. It was there they set up camp.

Wow, these men worked very hard, cutting down trees as they were set on building a cabin for my late mother where I would be born. They used small trees for the roof and put moss on top for the roof. Not long after they were finished building the cabin I came to be born.

My late mother told me: “They had built a hospital for you at that time.”