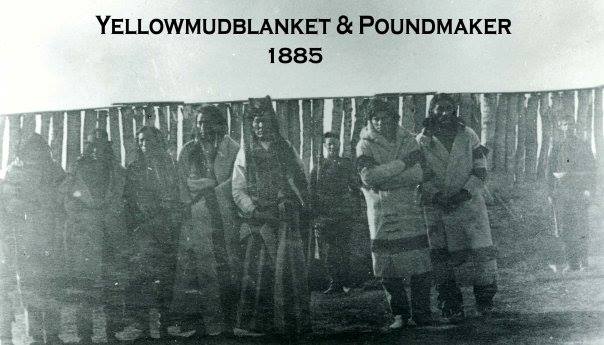 Photo from Tyrone Tootsis – Taken at Fort Battleford. First, second and third men from left , and first and second from right were among those hanged November 27, 1885. Yellow Mud Blanket and Poundmaker (fourth and fifth from the left) lived to be tried later. A day the Cree Nation should never forget

The eight Cree warriors that were hanged knew nothing of the legal system, and had no legal counsel or other advice. No defense was mounted. No reference was made to their victimization via Sir John A. MacDonald’s publicly stated policy of keeping the Indians as close as possible to starvation – and the hardline en forcement of that position by Indian Agent T.T. Quinn (the first to be killed at Frog Lake). Sir John A., knowing that Treason-Felony was a non-capital offence, personally ordered that the eight should be tried on charges of murder. The hanging was as good as done before the trial even began.

The eight Cree warriors hanged that day were buried in a mass grave at Fort Battleford, where this marker was placed many years later. Their names were Wandering Spirit, Round the Sky, Bad Arrow, Miserable Man, Iron Body, Little Bear, Itka, Charles Ducharme. [quoting Tootoosis – not the gravestone]

Students from the Battleford Industrial School were brought out to watch, according to another version of the story from a 1972 edition of Saskatchewan Indian: http://www.sicc.sk.ca/archive/saskindian/a72jul05.htm. Contemporaneous newspaper stories (reporting daily on the trial) seem to undermine this detail, reporting that the school had been taken over as barracks for the visiting court staff and military support – and the prisoners – children would presumably have been sent home to make room. Photo (below) from the Facebook collection of Paul Seesequasis.

The wife and child of Kitahwahken (Miserable Man) were also photographed at Battleford in 1885. (From the Facebook collection of Paul Seesequasis) Read more about the events at Frog Lake at https://creeliteracy.org/2012/11/23/battlefords-agency-tribal-chiefs-hosts-wandering-spirit-commemoration/