You always come first with me: kisâkihitin and “Order of Persons” in Cree 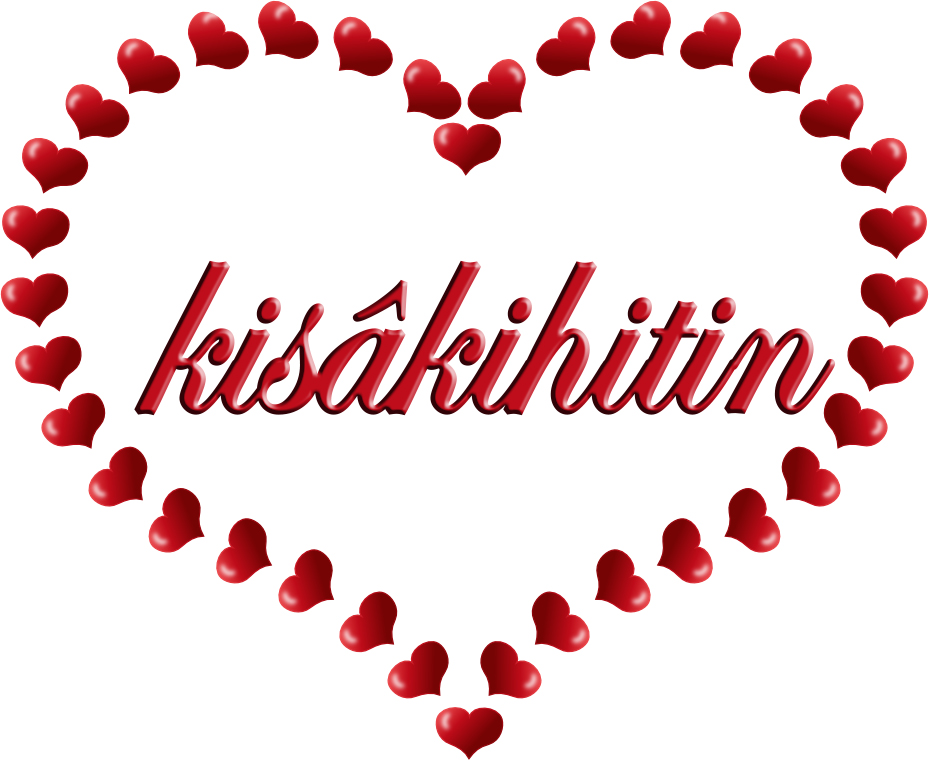 Thanks to Arok Wolvengrey and Mary Cardinal Collins for letting me share their Facebook discussion of why, in Cree, kisâkihitin ‘I love you’ begins with the pronoun ki- meaning “you”.  [Scroll down to the bottom for the valentine in plural form: “I love you all.”]

Or perhaps I should say “You all are loved and respected by me.”

Mary Cardinal Collins asked Arok Wolvengrey to talk about the form of the verb kisâkihitin “I love you” and why this is the traditional and correct way to express this, rather than the form “nisâkihitin” which many people, students, etc. seem to be using now.

The most important thing to remember is that Cree verbs DO NOT work like English verbs. That may seem obvious, but the details of those extreme differences might not be as obvious and in trying to search for the equivalences for English grammar, mistakes are being made and the language is inadvertently being changed.

First of all: forget anything you think you know about English “subjects”. That does not apply to Cree.

In English, we use word order (and sometimes the special (case-marked) form of the pronouns) to tell who is doing what to whom. So, when we say “I love you”, we know that “I”, the speaker, placed before the verb (and in the subject form “I”) am who is loving, and “you”, placed after the verb, are the one being loved. If we reverse the order to “you love me”, then “you”, being placed before the verb, become the one who is loving and I, being placed after the verb (and in the object form “me”) become the one being loved.
“I love you”
“You love me”
That’s word order and sometimes the special (case) form of the pronoun telling us who is the subject and who is the object, as needed in English grammar.

Cree doesn’t work that way. Forget subjects and objects. Cree marks verbs with person markers (ni-, ki-, -w, etc.) to tell us who is involved, but the order of those markers and their form never changes based on their role. In other words, the person markers never tell us the role (i.e. subject or object).

For instance, I can say:
niwâpamâw “I see him/her”
and
niwâpamik “s/he sees me”
In both of these, the ni- prefix marks the fact that the speaker (1, the first person; “I, me”) is involved, but it is something else entirely that tells us if “I” am doing the action or if the action is happening to “me”.

Similarly, in
kiwâpamâw “you see him/her”
and
kiwâpamik “s/he sees you”
ki– marks the addressee (2, the second person, “you”), but something else entirely tells us whether “you” are doing the action, or the action is happening to “you”.

It is as if we are saying in Cree:

First and second persons, as participants in the speech act, the ones talking with one another, are simply more important (in the speech act itself, not necessarily in real life) than the third persons. So, no matter whether you or I are the actors/subjects (or ones doing the action) or the goals/objects (ones affected by the action), we get marked at the beginning of the verb.

Now, here’s where it gets tricky. ki- “you”, second person addressee always outranks ni- “I”, me”, first person speaker. ALWAYS.

If both speaker and addressee (“me and you”) are involved, ki- must occur and ni- will not.

Think of the pronouns:
When only first persons are involved, we find ni-
niya “I, me; mine”
niyanân “we/us (exclusive); me and others but not you; ours (not yours)”

When only second persons are involved, we find ki-
kiya “you, yours”
kiyawâw “you all, you plural, you and others but not me; yours”

But when both first and second persons are involved, do we use both? NO. Which one wins? ki-.
kiyânaw “we/us, you and me (and others); ours (both mine and yours)”

The same principal extends to the verb forms when I act on you or you act on me.
kisâkihin “you love me”
kisâkihitin “I love you”
– or maybe it would be better for English speakers to think of this as “you are loved by me”, because whether you or I are doing the action, I must use ki– at the beginning because “you” are involved and it is more important for me to reference ki– “you” than it is for “me” to reference myself as ni-. This is deference. This is the speaker placing the addressee, the person being spoken to, in a preferred position. This is me giving deference to you as being more important than myself. This is respect. This is Cree.

When I say:
kisâkihitin
I am saying what translates in English as “I love you”, but we could just as well translate it as “YOU are loved by me”. When ki– comes first in this case, it indicates that referring to “you” is more important than referring to “me”

So compare these two words again. The beginnings do not change:
kisâkihin “you love me”
kisâkihitin “you are loved by me” = “I love you”

That is Cree, it is not English. When people today say “nisâkihitin”, what they are doing is using ni– because they are mistakenly treating ni– as the subject marker and using it because English has the subject “I”. That is English. It is not Cree.

Now, having said this, I will note that it is not only non-fluent students today who are doing this. This is likely a process of English influence that has been going on for some time now, and there are areas where fully fluent speakers will use the ni– form. And if that is what is being used in any particular area, and all the speakers agree with it, then so be it. That’s how languages changes, and make no mistake: all languages change over time. However, we can sometimes see (or hear) those happening and sometimes we can even understand the root causes of the change. In this case, it seems pretty clear that a fundamental feature of Cree (and Algonquian) grammar is being affected by English because of the pervasive influence this language has had, virtually eliminating (except perhaps in a few lucky areas) Cree monolingualism in favour of bilingualism or the outright destruction and loss of Cree. I was taught (in an artificial way in the classroom, but learned nonetheless) the way this pattern works in almost all Algonquian languages and certainly in almost all Cree dialects. You are more important and you are paid deference to by me.

Finally, there is another way to explain this.
Historically, Algonquian linguists refer to the way that second person (ki– “you”) appears to outrank first person (ni– “I,me”) as part of the “Algonquian Person Hierarchy”: Second person (2; you, the addressee) outranks First person (1, “I, me”, the speaker) and both outrank the Third person(s) (3, “he, she, it, they; the persons spoken about but not included in the speech act between second and first persons (“you” and “me”). In other words 2 > 1 > 3. Furthermore, Cree uses another system for differentiating between different third persons, which linguists call “proximate” and “obviative”. Simply put, the proximate is the most topical third person being spoken about and the obviative is less topical. We can talk about the proximate and obviative persons as third (3) and third obviative (3’), or as third (3) and fourth (4) persons. Thus, the Algonquian person hierarchy is: 2 > 1 > 3 > 4 and can even be extended by adding > 0 (representing inanimate things).

I have taught this and I know that most students and Cree speakers do not like the use of the term “hierarchy”, but that term is not necessary. I prefer to refer to this as the Algonquian Circle of Reference, in which first and second persons are always at the center within the speech act itself as we talk to one another (kipîkiskwâtitonaw “we (you and I) speak to one another”; note the use of ki-). Within this inner circle of the speech act, I (as speaker) will always show deference to you (as addressee) and so ki– will be used regardless of whether or not “I” or “you are doing the action. Outside this inner circle of the speech act are the persons that we are speaking about, the third persons, and we will reference ourselves (“you”, “I/me”, “we/us”) in relation to third persons. The proximate or most topical third persons are those closest to us in the center of the circle. Obviative or less topical (but still animate) third persons (or fourth persons) are next, and inanimates are next. This could be used to represent the act of speaking (the speech act) in all languages, but Algonquian languages, and especially the Cree language, make this absolutely explicit in the way that they indicate person marking. 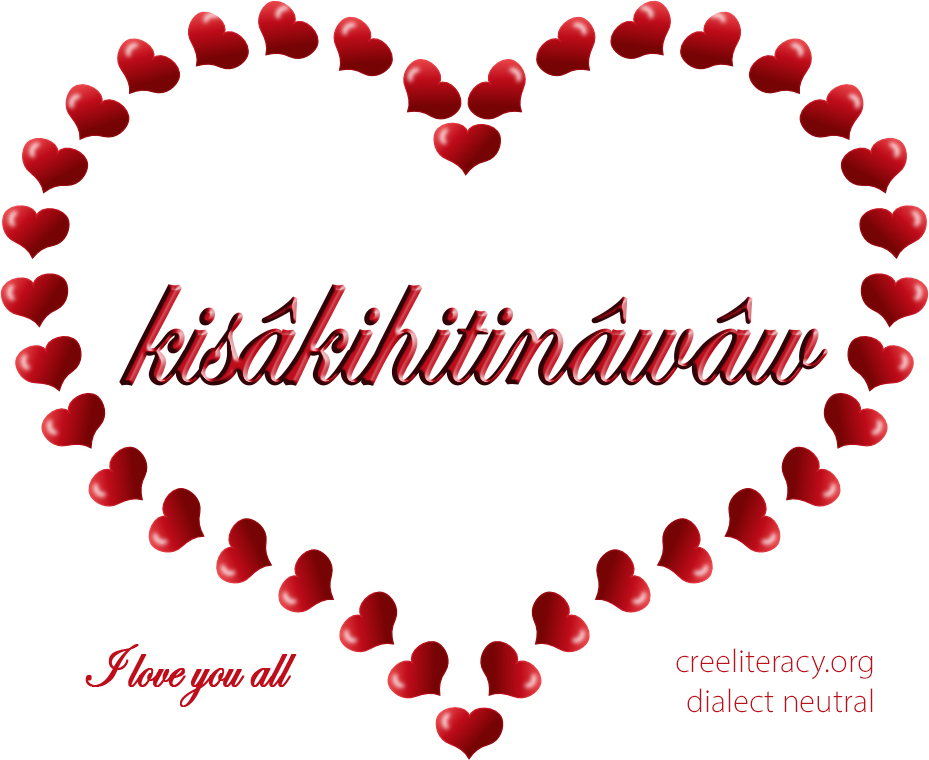