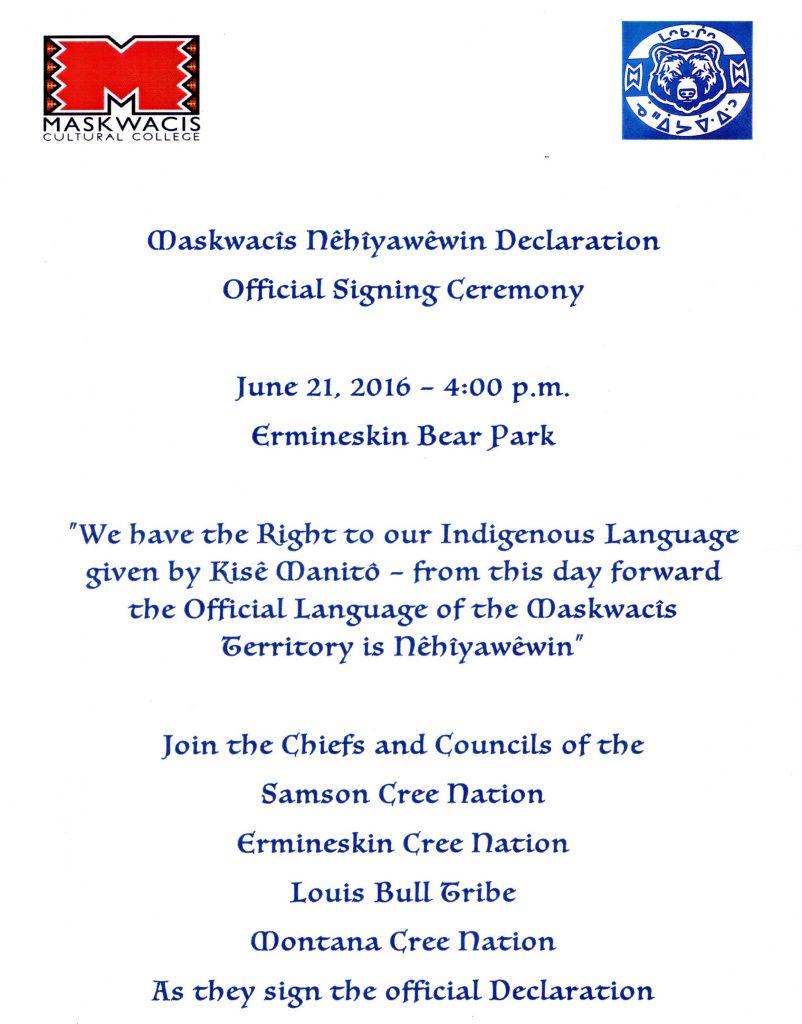 Exciting news from Maskwacîs Cultural College! Wish I could be there to help them celebrate this momentous occasion. Would sure love to see the text of the declaration – and maybe some photos! Full text of their 5 May Press release follows below (or read it here).

Full text of 5 May Press Release:

For Immediate Release
Maskwacîs, AB, May 05, 2016- The four First Nations of the Maskwacîs Cree, the Samson Cree Nation, Ermineskin Cree Nation, Louis Bull Tribe and Montana Cree Nation, made an historic decision during their meeting last night held at the Peter Bull Memorial Recreation Centre.~ They have adopted the Maskwacîs Nêhiyawêwin Declaration that proclaims the official language of Maskwacîs is Nêhiyawêwin (Cree).

The Maskwacîs Cultural College was mandated since 1974 to preserve the Cree culture, traditions and language while providing post-secondary educational opportunities to students. Elders and leaders knew back then they must make every effort to retain their Indigenous identity as over the years there had been a decline in peoples speaking their language, which is so closely connected to the traditional ceremonies. With the Truth and Reconciliation Report’s Calls to Action and the UN Declaration on the Rights of Indigenous Peoples, the leaders agreed with the Elders that now is the time to act.
Standing before the four Chiefs and Council members, Jerry Saddleback, Director of Cultural Studies atthe college, conducted his entire presentation in Nehiyawewin. Sharing the vision of those first students of the college who earned their degrees in education, many now gone and others sitting as Elders as witnesses to the presentation; the vision was to bring back the language stolen from them through the Indian Residential School era and the child welfare system. During the discussion there were members of Council who admitted that they were not taught the language growing up and had the desire to learn so their children will take pride of being an Indigenous person.

Chief Kurt Buffalo stated “We will make this declaration for our peoples but I want it to go beyond our community. I will call upon the provincial government to recognize our language as one of the official languages for this region, it can be done since the NWT passed legislation recognizing the Indigenous languages in their territory as official languages.” Chief Irvin Bull commented “We do not need to ask permission, we have that authority to enact what is best for our peoples and our Nations but if government both provincial and federal are serious about renewed relationships with the Indigenous
peoples of this country, then they must recognize the basis of our culture – our language.”

“I am very grateful for all those who came together to work on this issue of language. I am honored to support the declaration and I acknowledge the Elders, teachers, the college and all those who worked hard at the international level to develop the UN Declaration on the Rights of Indigenous Peoples, most of that work was done by Maskwacîsak” said Chief Darrell Strongman. Chief Randy Ermineskin added “We must have our schools working together to implement this declaration that includes having the Nêhiyawêwin language in the curriculum.” Currently the four First Nations are developing a collective plan relating to education for the four First Nations.

On behalf of the Maskwacîs Cultural College, President Patricia Goodwill-Littlechild announced that they are preparing for the official signing of the Maskwacîs Nêhiyawêwin Declaration. The proposed date and location will be June 21st at the Bear Park Arbor during National Indigenous Day honoring the original peoples of this country.