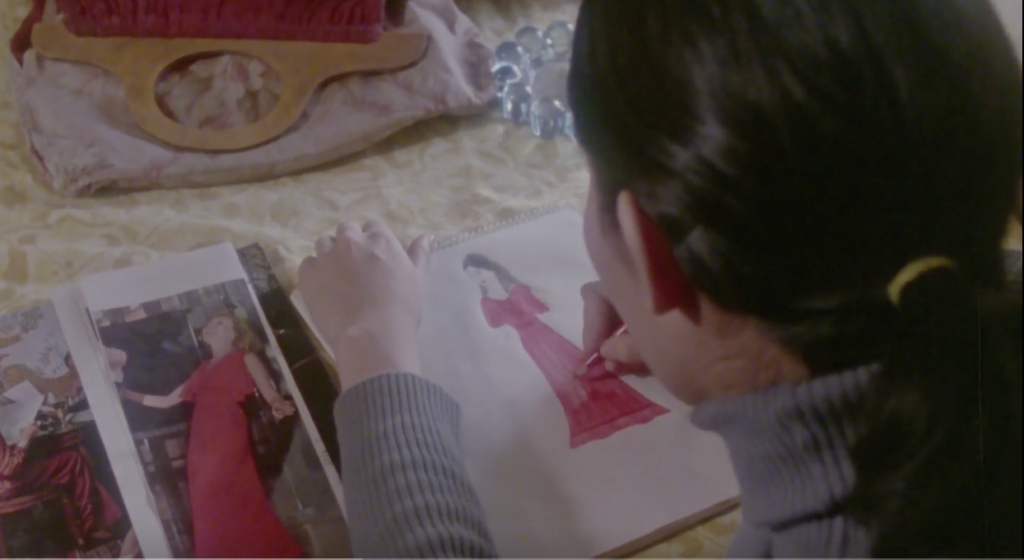 Thanks to Wayne Jackson for permission to share this good work originally posted in the FaceBook group Nêhiyawêwin (Cree) Word of the Day on May 10, 2018.

The film can be viewed online, or purchased as dvd from the National Film Board.

Kelly is a non-status Indian, best suited, it seems, to a traditional outdoors lifestyle. His daughter, Theresa, is proud of the ways of her people, but she is also drawn to the world of the white man. The Red Dress tells a story of conflicting loyalties: of the glorious past and the demands of the present day, and of traditional values and family affections.

skwâc namoya nikî-nipân, so I made myself useful. I remember showing this to my nêhiyawêwin classes. It is about 40 years since it was made and I love the nêhiyawêwin that’s spoken by the late Sam Sinclair (from Slave Lake) and the old woman who I’m calling nohkom.

I broke down their dialogue in SRO, it’s a good study for new speakers. The dialogue is already translated to akayâsîmowin. Time has been also stamped for speeding up the parts where nêhiyawêwin is being used.

I love the way ‘macistikwânê‘ is used by both the nohkom and Sam, it can have both negative and positive qualities in a person. Complete dialogue follows below.

April 2021 update: Now added: Wayne’s video of only the Cree language segments of the film (below)

“I watched this written and edited by Maria Campbell with Maria in Edmonton. I wasn’t aware the NFB even had it, so imagine my utter surprise when for a brief two seconds, my great grandmother Madeline Letendre (L’Hirondelle) appears in a bar scene having a beer along with a whole bunch of other Lac Ste. Anne people!! lol.
This short film touches on everything of that day and time that was affecting our people. Sometimes subtly like the shots of clear cutting. Sometimes overtly, like how the main character had to hide when hunting like so many non-status people and Metis had to. How white people started to control everything, and how whole communities felt the squeeze of colonialism and had such limited choices as their lands were taken over for “development”.
And it was also interesting to see the Red Dress being seen by a young woman as a symbol of power. This was the first time perhaps that the Red Dress appears as that, adding another layer to the history of the “red dress” as representative of both MMIW and power.
Description on NFB:
“Renowned Métis author and screenwriter Maria Campbell explores themes of cultural identity, sexual assault and the familial impact of colonialism in The Red Dress, echoing the themes of her seminal memoir, Halfbreed.
Kelly is a non-status Indian, best suited, it seems, to a traditional outdoors lifestyle. His daughter, Theresa, is proud of the ways of her people, but she is also drawn to the world of the white man. The Red Dress tells a story of conflicting loyalties: of the glorious past and the demands of the present day, and of traditional values and family affections.”

Let me talk to you quietly – for we are brothers. That is something we never learned in the white man’s school. You know the people I work with. Like old Beaverbones and his people. Well, they live a very traditional life. They don’t want anything from the government. They are stubborn, proud and independent, like you. If you and I work together, I’m sure that they would listen. We could get them a fair deal. Do you understand?

You remember grandfather and the old spiritual way. That’s good, but you must accept the old way before you can use it. Many of our people are lost, they try to follow the white man’s ways. In this new job, you must be spiritually strong, to be of any help. That young man in the bar is desperate; like many young people he is searching. You are an elder now. Your grandfather gave you his pipe and medicine bundle. Use them well and help our people.

I want to run away, kohkom.

Yesterday you talked about grandfather and the old ways. You spoke in words, but not from the heart. Yes you have lost your daughter, and it’s your own doing. Go my son, smoke your pipe and talk to your creator. I will talk to him too. I will ask for strength for all of us.