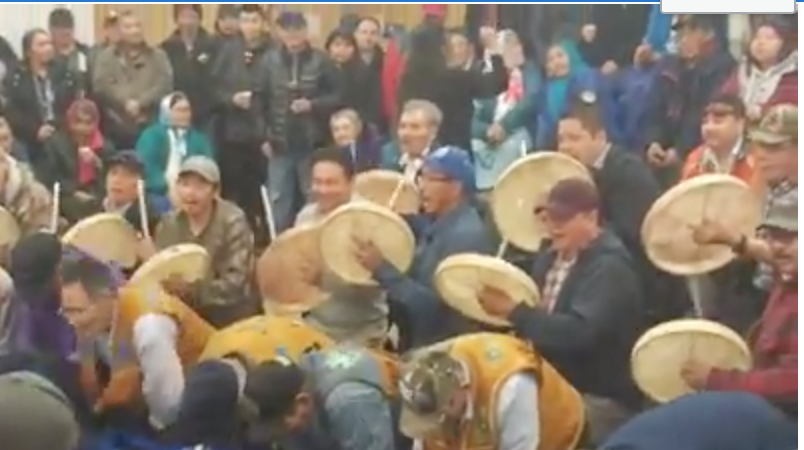 This post was inspired by a FaceBook video of Dene elders hard at play, publicly posted on FaceBook by Patrick Yakinneah, and embedded here with Patrick’s permission. Another piece on Dene handgame was produced by the CBC, and can be viewed at CBC North. These videos are great, but a couple of Cree elders who saw Patrick’s video were quick to point out that handgames didn’t just belong to the Dene people (though they probably encountered less colonial interference further north, permitting people to continue to enjoy them.)

Edward Gordon Beauchamp commented that he was about 8 years old when he saw this game being played, but he never saw it again. He is close to 86 now. He saw it in Grouard, Alberta.

George Cardinal commented that the game is still played by the northern Cree (speakers of the northern y-dialect, or Bush Cree. Though he’s a youngster, only 65, he says he’s played the game himself.

Following here are two Cree handgame stories, collected with thanks to Barry Ahenakew and Roy Thunderchild (whose story was sent via Ramona Washburn). Rendering into SRO thanks to Solomon Ratt.

This game comes from long ago. The told stories of challenging each other. One story is of a Cree who was out riding his horse when he arrived at a nest, the nest was up in a tree. He climbed up as he was looking for feathers. While he was in the nest a stranger (Blackfoot) arrived riding. By coincidence, the stranger was also looking to gather feathers.

Anyway they begin to play, they played handgames. On the seventh day the Cree had stripped the stranger of his clothes. The Cree came back northward bringing with him the feathers that he had gathered from the Eagle’s nest, he also brought with him the stranger’s belongings, his clothes, and his horse.

Yes, this is the Elders story about the handgames. I did not tell of how they made peace using sign language and also about their challenge on who owns the feathers, and of their wager of their belongings, their weapons, their clothes, and their horses.

Ramona Washburn provided the following text by Roy Thunderchild (with translation into Cree by Solomon Ratt).

So there was a group of Cree men who went down to Blackfoot territory to hunt buffalo. They got ambushed by a group of Blackfoot men. The Blackfoot men killed them all except for one Cree man but they left him badly injured, almost dead. They left him alive to warn others about going into their territory.

Well this Cree man was lying by a creek bed with some trees hills around. He was laying there wondering what he was going to do and in so much pain he thought he saw something by the creek bed. He was losing consciousness. He closed his eyes and when he opened them he saw little men. He closed his eyes again and when he opened them he could see that little men were surrounding him. They then went to pick him up. He then lost consciousness.

He woke up in a cave like place. He could hear music but he could not stay awake long and he went back into unconsciousness. He did this for 2 days, drifting in and out of consciousness and still hearing music each time he was awake. Meanwhile the little people took care of him. Finally on the third day he was able to stay awake a little longer. He could now sit up and see what he was hearing. He could see the little people playing some kind of game and he watched until he learned what they were doing. These little people played this game for 4 days straight in order to help this Cree man to heal.

Finally, here’s a  link from SICC that describes the game as anthropologist David Mandelbaum saw it in 1934.
http://www.sicc.sk.ca/archive/heritage/ethnography/cree/recreation/handgame.html