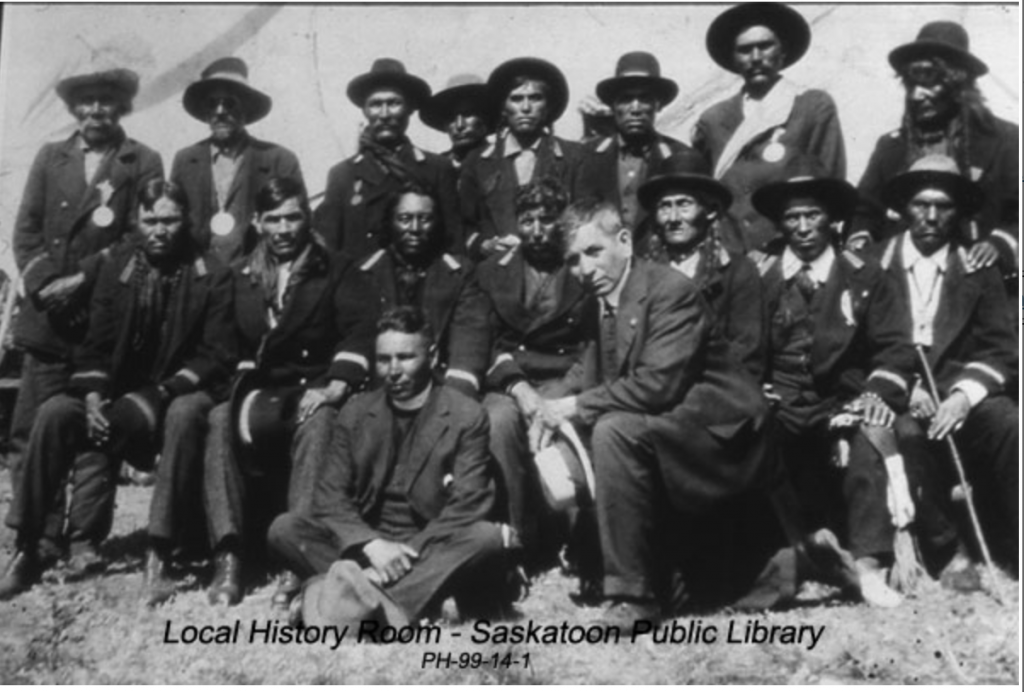 As this International Year of Indigenous Languages (IYIL) comes to a close, I’m seizing these last minutes to report about my quest to honour the year: my search for the syllabic newsletters of the Reverend Canon Edward Ahenakew. Ahenakew, who was sometimes described as the Martin Luther King of the Cree, published monthly syllabic newsletters between 1925 and 1961. In English, the newsletter was titled the Cree Monthly Guide. In Cree, its title reads: ᓀᐦᐃᔭᐤ ᐅᑭᐢᑭᓄᐦᑕᐦᐃᑯᐏᐣ (transliterated into roman characters; nêhiyaw okiskinohtahikowin).

The Reverend Canon Edward Ahenakew was born in 1885 on the Sandy Lake Reserve in Saskatchewan (now known as Ahtahkakoop Cree Nation). The Cree Literacy Network connects with him as the great uncle of our honorary founder, the late Dr Freda Ahenakew. As a child, Freda became impassioned with education and with all that Cree language and culture entailed, sitting at his knee, listening to his gifted storytelling.

The “Holy Grail” of Written Cree

If you search libraries and archives across Canada, it’s fairly easy to find Cree hymnals and gospels and prayer books. In fact, thanks to the internet, many of these titles can even be accessed electronically. As translations, however, each one is heavily influenced by the original language and religious philosophy. Direct translation seldom produces “natural” Cree. Examples of natural and authentic written Cree uninfluenced by English (or French) are rarer than paved roads on the Rez. This is makes Ahenakew’s original writings incredibly precious.

If Ahenakew published 12 issues a year over 36 years, we could conceivably find as many as 432 newsletters to celebrate as the largest known collection of original writing by a fully fluent first-language speaker of nêhiyawêwin. Ever. In fact, the total number of issues becomes immaterial in a world where there are virtually no other known examples (at least before 1970) of Cree written by a fully fluent speaker.

We don’t use the word “quest” for things that are easy to find: I soon began thinking of the newsletters as a kind of “Holy Grail” of the Cree language.

Steps in the Search

Since Ahenakew was an Anglican clergyman, I began my search (probably as early as 2017) with the General Synod Archives of the Anglican Church of Canada. Their collection includes numerous photos of Ahenakew, and many documentary references. Although library catalogs identify the Anglican Church as publisher, the archives has none of the newsletters in its collection. The Toronto archivist referred me to the Diocese of Saskatchewan in Prince Albert.

Ahenakew had spent most of his career – indeed, most of his life – in Saskatchewan, and the Saskatchewan Diocese would have been mandated to collect materials created on their watch. Sadly, they had no newsletters, either. The archivist there told me the newsletters had been discarded (if they were collected at all), presumably decades earlier. Perhaps that’s not surprising: during the Residential School era, Cree language retention was hardly a goal of the Anglican Church, or of Canada in general.

During a visit to the Provincial Archives of Saskatchewan in Regina, I found further hints about the newsletters in the papers of Ruth Matheson Buck, who had edited Ahenakew’s well-known book, Voices of the Plains Cree, but I was disappointed once again to find no newsletters. On my way out the door that day, venting my frustration that the newsletters had been lost by the church, the archivist on duty astonished me: “We have some of those.” A quick look at the finding aid showed a partial run of the newsletters, but I was out of time. I promised to return as soon as I could. Next month turned into next year. Soon it was 2019.

Still hoping to find a complete collection, in 2019 I began phoning some of the Anglican churches that remain in Saskatchewan Cree communities, that might have had subscriptions. But small churches suffer from constant staff and volunteer turnover, shortage of storage space, and the constant struggle between people who organize things by keeping them, and those who organize by throwing them out. I was striking out again.

Trying to imagine who else might have subscribed led me to the University of Saskatchewan, where Ahenakew graduated in 1912. There I found a good biography that included – tantalizingly – a sample newsletter from 1926. That sample newsletter (which is, sadly, illegibly scanned) turned out to be a trial English language issue (that I eventually read for myself in November 2019). A contact there linked me to the international library catalog WorldCat.Org that showed holdings at the University of Manitoba and at Library Archives Canada.

I visited the Archives and Special Collections of Elizabeth Dafoe Library at the University of Manitoba, requesting all available issues. I was presented with three slim cardboard folders, that each holding one crumbling issue that I was allowed to photograph. A pencilled note on one suggested they had been preserved because they contained some English. I was thrilled that I’d finally made a start, but infuriated that other Cree-only editions must have been thrown out (presumably by the original owner, before donation to Dafoe Library). Surely Library Archives Canada would have more.

In May of 2019, Dorothy Thunder invited me to tag along when she visited Ottawa. I grabbed the excuse to visit Library Archives Canada in person. With their catalog showing the dates of the newsletter’s full run, I looked forward to seeing the entire collection. I sat down in the reading room, and was presented with their entire collection. It consisted of one single issue: Volume One, Number One. Again I was allowed to photograph it, but I was devastated to learn that so little of the vast collection I was seeking had been preserved.

Back to Regina: The Robert A. Logan Fonds

In November of this year, en route to the SICC Language Keepers Conference, I was finally able to return to the Provincial Archives of Saskatchewan in Regina. There, at last, I was presented with the papers of Robert A. Logan, that had been mentioned to me in 2017. Logan was an amateur linguist from Nova Scotia, a non-Indigenous former Air Force officer, and a meticulous record keeper who had determined at some point to teach himself Cree. Amongst his papers, there is correspondence with Ahenakew, and a remarkable collection of Ahenakew’s newsletters, to which he subscribed for 13 years. At long last, I held in my hand over a hundred of Ahenakew’s precious newsletters.

I skimmed through the pages with excitement – though I was really only able to decode a few syllabic words. My biggest triumph, after all, was the finding. I will need to rely on my Cree-speaking friends and associates to help fully read and process the content. Still, English words embedded amongst the syllabics show a 1942 issue dedicated to news of World War II. And in 1952, the stories mention the death of King George VIII, and the succession of Queen Elizabeth II. I may not be able to read it – yet – but here, at long last, we see Edward Ahenakew reporting in his own Cree language about major world events of the day. The collection was not as complete as I had hoped, but nevertheless, I was over the moon.

Sharing the Treasure – Next Steps

The next day, Saskatchewan Archivist Jeremy Mohr made time to listen to my enthusiastic (if long-winded) tale of the quest, and the Grail, and this remarkable, valuable find. It was truly an honour to explain to him the value and significance that these newsletters hold for Cree language revitalization and retention. Archives, after all, exist to preserve and protect documents of all kinds in hopes that, some day, the right researcher may come along and find the magic within them.

Thanks to Mohr, a Memorandum of Understanding was jointly signed earlier this month between the Cree Literacy Network and Saskatchewan Archives that will – within the next year – lead to the scanning of all the Ahenakew newsletters from the Logan collection, and make them available online.

And so, my quest has come to rest for 2019 along with the International Year of Indigenous Languages. I’m still hoping that there are more issues of the newsletter – or other preserved examples of written Cree – to be found. But it is only once the newsletters are scanned that the real work can begin. The texts must be re-typed, and transliterated into SRO, and translated. And the new typescripts can be added back to the Saskatchewan Archives online collection, and to the text corpus at the University of Alberta that supports the itwêwina dictionary and its concordance services.

Truthfully, there’s no telling what stories (or linguistic surprises) those newsletters might hold, or how they might eventually be used in support of language. Perhaps that’s a saga for another year, or maybe for the United Nations International Decade of Indigenous Languages (beginning in 2022), as the quest for more Ahenakew newsletters – or other examples of written Cree continues.