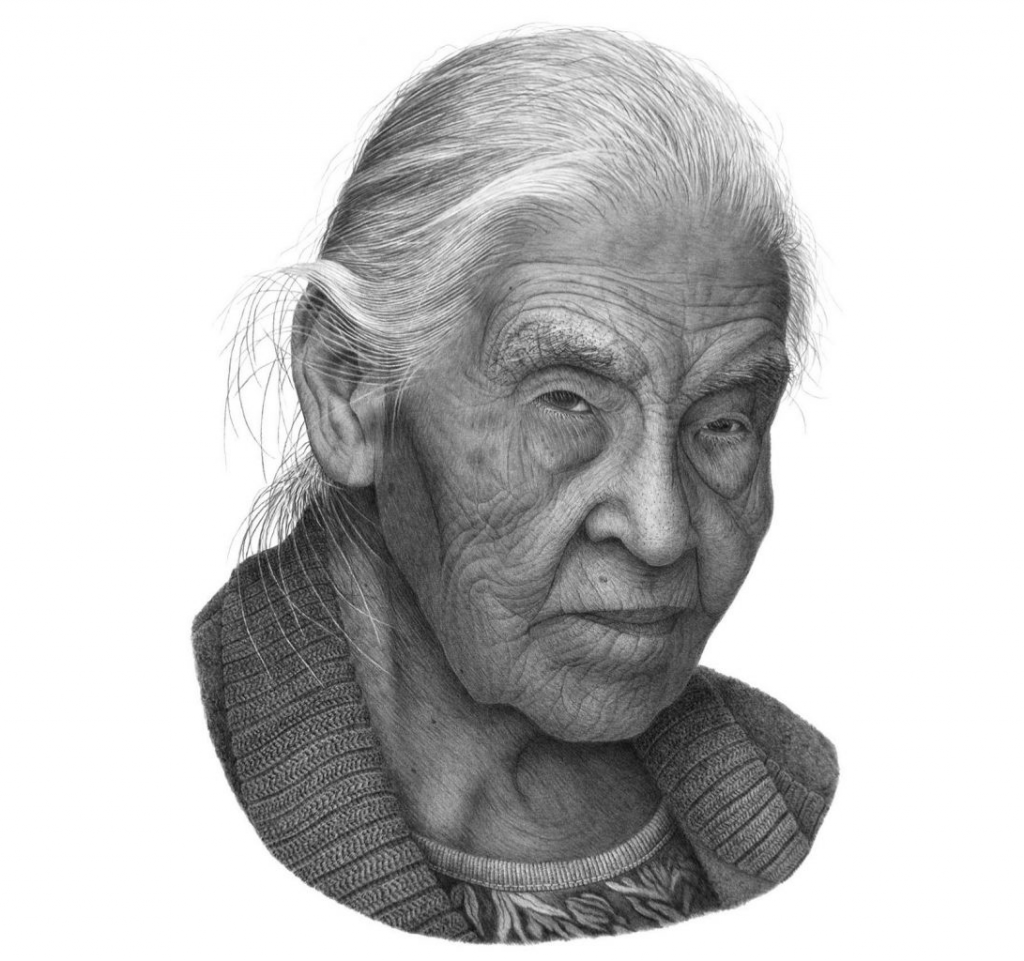 Our dearly loved honorary elder Ruth Elizabeth “Bette” Spence was just a kid of 99 when  Gerald Kuehl created this remarkable pencil portrait of her in 2019. It’s part of his “Portraits of the Plains” collection.  (Find more of his portraits in his “Portraits of the North” FaceBook group.) What follows below is the bio Kuehl prepared from his interview with Bette, and with her devoted daughter and care-giver, Janet Fontaine. The portrait and bio are shared below with permission, and with gratitude.

When I went to Regina around 1985 to try to learn about Cree music, I had instructions to seek out Mrs Spence. She took me under her wing, even taking me home where she made lunch daily for herself and her husband Ahab, then Director of the Department of Indian Languages, Literature and Linguistics.  I was honoured to share their company, and to see some of her original artwork up close.

One of my favourite outings with Mrs Spence included a visit to the Winnipeg Art Gallery, along with my two sons, then pre-teens. “Holy Cow,” she said, as we stepped into the exhibit of Saskatchewan artist Joe Fafard’s legendary cows.

With this last year’s rules of care and isolation and my own travel in the north, a visit over tea and cookies was long overdue. I’m grateful she was able to have a phone visit today, to hear her voice and words of warmth and encouragement, unchanged from the first time we met.

When I asked Bette what she remembered about growing up, her eyes twinkled with laughter before offering, “I didn’t.” Despite her ready grin, Betty looks back on an unusual childhood. “As a young girl I spent a lot of years in the hospital. I had TB in the hip.” At three years of age, she spent six years in medical care, leaving just in time to enter school. She attended a day school — similar to a public school — for a few years before moving to a boarding school. “At boarding school we just went to school half a day,” she explained. “The other half a day we did domestic work on the school grounds. You didn’t dare sit down. You had to be doing something.” Bette graduated after six years, then 19 years old. Her next step was attending a college in Toronto, a feat that proved a tremendous challenge due to exceptionally poor eyesight. “She managed because she could hear what the instructors were saying — she memorized that,” her daughter, Janet, explained. “She just couldn’t see what they were writing on the boards.”

After returning from Toronto at 22, she met and married Ahab Spence from Split Lake. Bette’s marriage was hugely defining of her life. “I married Ahab on New Reserve. I didn’t stay there.” Indeed, she didn’t. Janet quickly listed nine places to which the couple moved during their 60 year marriage, concluding, “You move a lot when you are a minister,” as Ahab was. He served as a priest from 1955 to 1963. In 1963 Ahab assumed the role of principal of Pelican Residential School. The following year, he was awarded the LL.D., the highest academic honor given to an Aboriginal Canadian at the time. Bette had an impressive academic accomplishment of her own, completing a Bachelor of Fine Arts shortly after being declared legally blind. [Janet Fontaine achieved accolades and firsts of her own, but that’s a story for another day.]

Bette was rebellious by nature, an attribute that quite literally birthed her greatest causes. “Because of her childhood TB, she was told not to have children,” Janet informed me. But that did not deter Bette; “I was going around bragging, ‘I have a girl! I have a girl!’” she recalled. “My first child and she was happy and healthy as long as she was eating.” Bette went on to have five more children. “That is characteristic of her — that rebel quality,” reflected Janet.

The art embellishing Bette’s living room was crafted by her own hand and touted her reverence of nature. The largest painting was as rich with meaning as it was with color, using snapshots of each season to chronicle a passing year in a single frame. Nature, Bette says, is the “model” for her artwork, though she denies ever capturing its true beauty on canvas. “We will never come close,” she says in her book, “nor begin to compare ourselves with the greatest artist of all, Mother Nature.” A paintbrush was not her only tool, however. Bette was an expert seamstress before her art graced paper. She would stitch scenes into aprons, each one uniquely wrapping her love for nature in her joyous creativity.

Bette Spence turned 100 years of age four days after we first met. Her infectious humor has followed into what she calls “the winter” of her life. She is buoyed by her art and the respect from young people who appreciate this humble woman’s knowledge and wisdom from a life well lived.