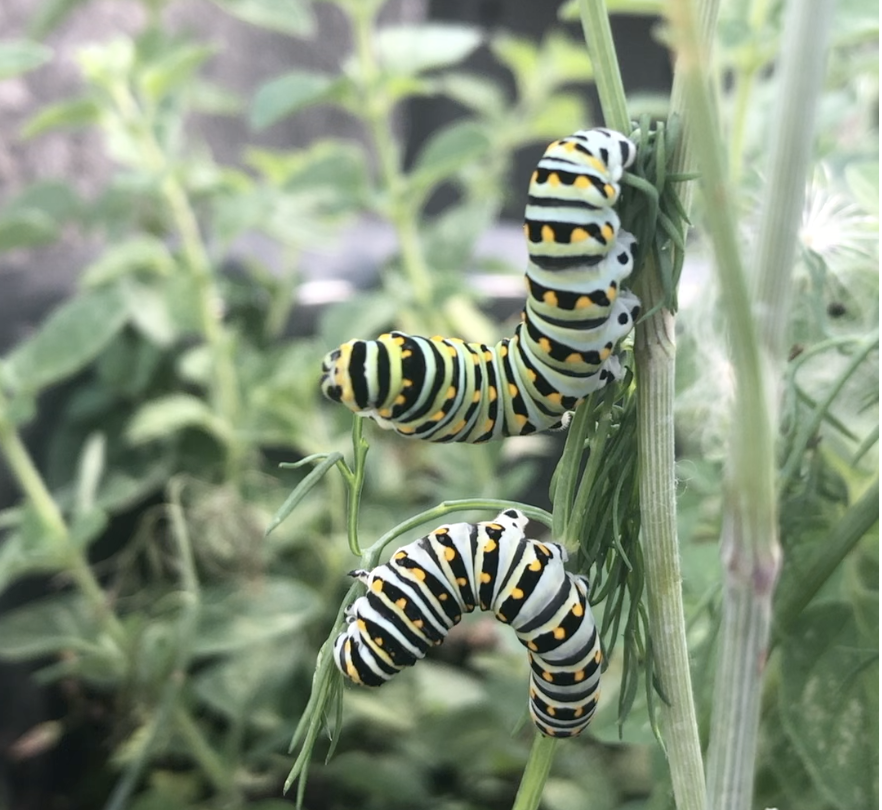 Once a caterpillar walked along. He walked for a long time, becoming very tired.

So he crawls to a branch of a shrub and wraps himself there. He sleeps for a long time. When he awoke he was surprised that he flew up from there!

Scroll all the way down to find Sol’s video-from-PowerPoint, that combines audio with text.

======
Ed. Note: The photos in this post are all from Arden’s Real-life Caterpillar Caper, 2019, which Sol convinced me to write, below. Sadly, I don’t know nearly enough verbs to write the story out in Cree, but I hope it will amuse you anyway! 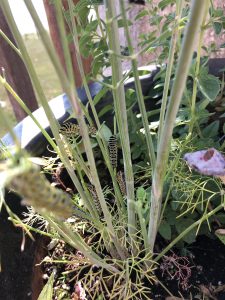 Look what they've done to my dill! 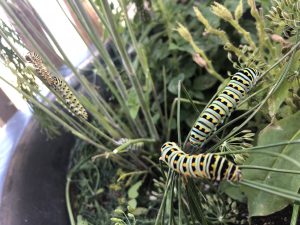 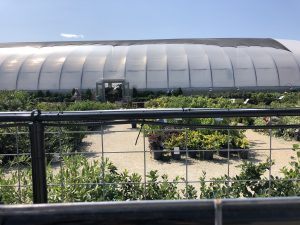 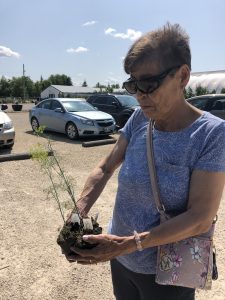 Mighty Helen and the last-chance dill. 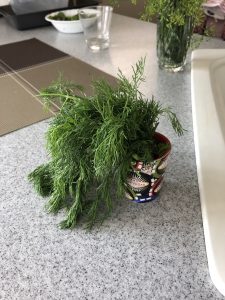 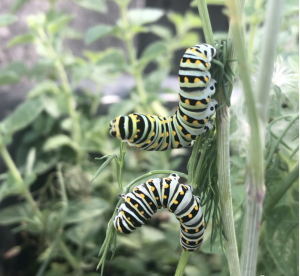 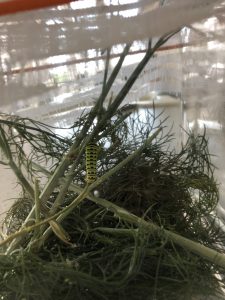 Sole survivor in its new glass home, ready to move to Lenore's house. 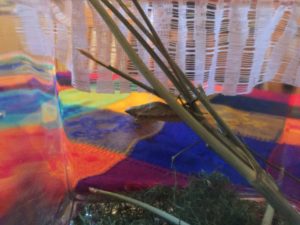 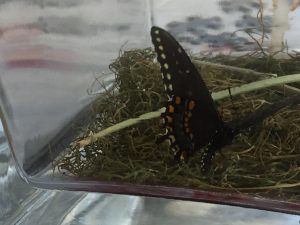 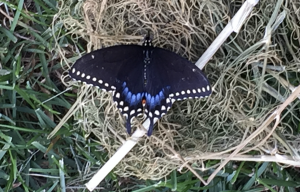 One hot holiday Monday in Winnipeg, Arden stepped out on the deck to water her plants. Something was horribly wrong with the dill. There was nothing left but stems.

Looking a little closer, she was astonished to see almost a dozen fat, spotted caterpillars – green, yellow and black – crawling up and down the empty stems.

As she rushed to the house to ask Google about pest removal, she gasped as she remembered that some caterpillars turn into beautiful butterflies. And butterflies, like bees, are really important pollinators that keep our food and flowers growing, supporting life on earth.

Although they were clearly crazy about dill, Google identified the new pets as Parsley Caterpillars, destined to become Black Swallowtail Butterflies. Suddenly, Arden’s mission changed from pest control to nurturer-in-chief. But the caterpillars had already eaten all the dill! Not only that, the deck was on the upper level of the house, and there wasn’t another green patch in crawling distance!

Arden offered them parsley from another of the garden pots, but the caterpillars were unimpressed. They obviously hadn’t consulted Google. It was time to find more dill. But it was a holiday, and all the stores were closed. Finding dill would be a challenge.

Arden hopped in the car and headed for the edge of the city, looking for a market garden that might be open. They first one was closed, but Arden flagged down a man out watering the plants. After hearing her story, the worker went into the greenhouse, and returned with a tiny, mostly-dried-out dill seedling. It was all they had left. She thanked him for his kindness, and continued the hunt.

Further along the country road, she found a fancy-schmancy garden boutique holding its grand opening. Arden paid $6 for a tiny bunch of chi-chi designer baby dill. But would it be enough? The dozen hungry caterpillars had demolished an entire dill plant virtually overnight, and there was no telling how much more they might need before metamorphosis. The hunt continued. Arden eventually arrived at a small, informal garden stand, and bought two enormous bunches of pickling dill.

She rushed home to feed the caterpillars, carefully draping sprigs of fresh dill across the empty stems of the dill plant where the caterpillar family was still milling. In appreciation, the caterpillars crawled out onto the freshest sprigs, held them in their four front feet, and proceeded to munch them down like monkeys eating bananas.

For four days, Arden continued offering sprigs of dill (kept fresh in the fridge!), but each day there were fewer caterpillars to feed. Had they crawled away to form their chrysalises? Had they become dinner for a passing bird? Arden checked all around the deck every day – even underneath the floor boards – but never discovered where they might have gone, and never saw a butterfly.

Finally, there was only only one caterpillar left, but it was time for Arden to travel north. Determined to give this last caterpillar a chance for survival, she built it a home in a glass vase, adding some grass, a few sticks and plenty of fresh dill. She covered it with a piece of netting, and took it to the home of her friend Lenore. Lenore agreed to keep watch, along with her grandchildren.

About a week later, Lenore and her grandchildren saw the caterpillar transform into a chrysalis, hanging, inside the vase, from one of the dried dill stems. But 25 days later, nothing more had happened. Fall was coming. How long could a caterpillar sleep? Had something gone terribly wrong? Arden was sad, but life is rough for butterflies. Even when they’ve been hand-fed chi-chi designer dill.

Then, suddenly, one morning nearly a year later, Arden opened her email to find photographs from Lenore, who had faithfully kept the chrysalis safe in its glass vase home. That sleepy, sleepy caterpillar had slept through the fall, through the winter, and through the spring, finally emerging eleven whole months after forming its chrysalis.

And Lenore – who turned out to be the perfect butterfly-mother – remembered to take photos before she took it out into her back yard, removed the covering net, and set it free. (Thanks for the happy ending, Lenore!)