There is no Easy Route: Solomon Ratt (y-dialect) 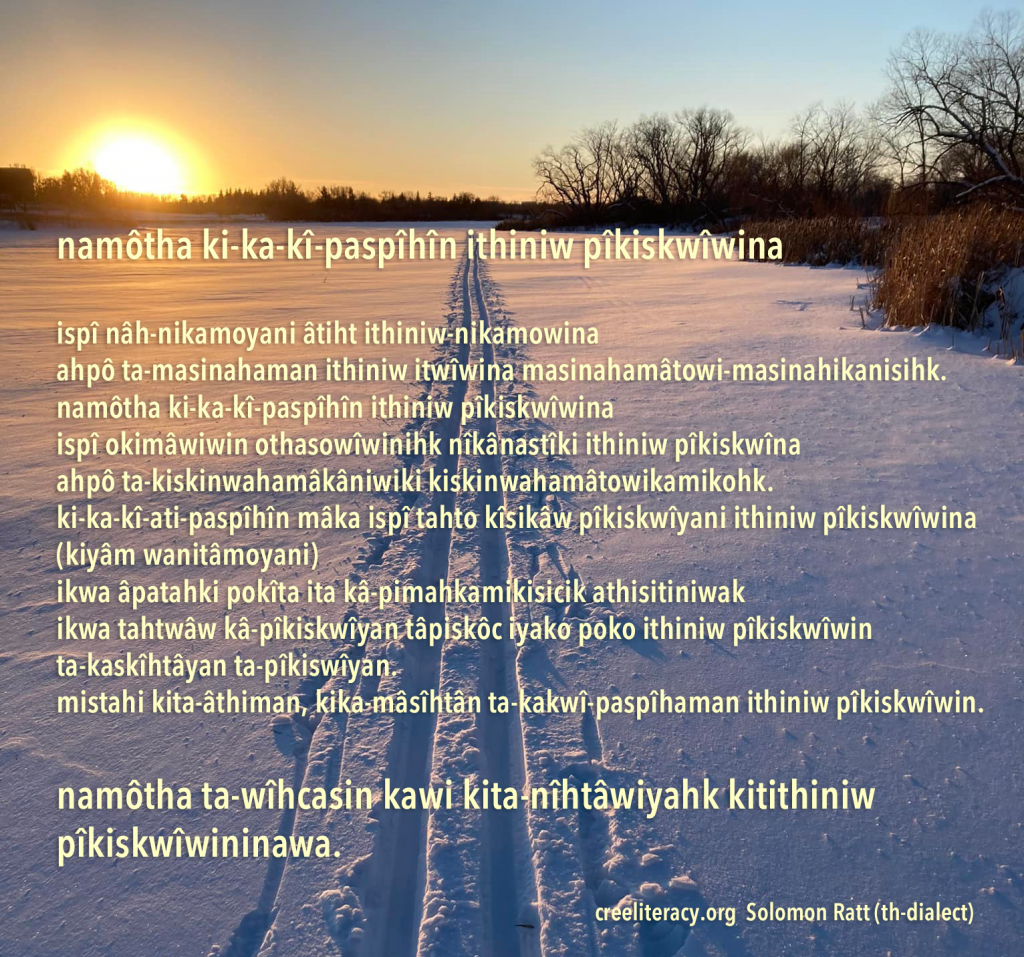 When I stumbled upon an interesting quote about language reclamation, I passed it on to Solomon Ratt for translation into Cree. The original quote is from a 1971 book by Ellis and mac a’Ghobhainn, titled The Problem of Language Revival. Ellis and mac a’Ghobhainn focus on Celtic language restoration, but the truth for Celtic and for Cree is identical: There is no easy route to the restoration of a language.

A language cannot be saved
by singing a few songs
or having a word printed on a postage stamp.
It cannot even be saved by getting ‘official status’ for it, or getting it taught in schools.
It is saved by its use (no matter how imperfect) by its introduction into every walk of life and
at every conceivable opportunity until it becomes a natural thing, no longer laboured or false.
It means in short a period of struggle and hardship.
There is no easy route to the restoration of a language.

Sol chose to interpret the quote more specifically for First Nations languages, and to remove the sugar-coating about the effort involved. Here is Sol’s translation, followed by his interpretation back into English. The word “route” is used idiomatically in the original, and in the title of this post – but it has no direct counterpart in Sol’s interpretation.

Here’s a translation back into English of Sol’s interpretation:
You cannot save FN Languages
if you sing songs in FN languages, or put FN words on stamps.
You can’t save FN Languages by government decision to make FN Languages a priority (as in FN Official languages Act)
or to teach them in schools.
But you can save them if you speak them every day
(even if you misspeak)
and if they are used in every activity where people are,
and if you speak them as if that is the only language you can speak.
It will be very difficult.
You will struggle trying to save FN languages.
It won’t be easy to become fluent in our FN languages