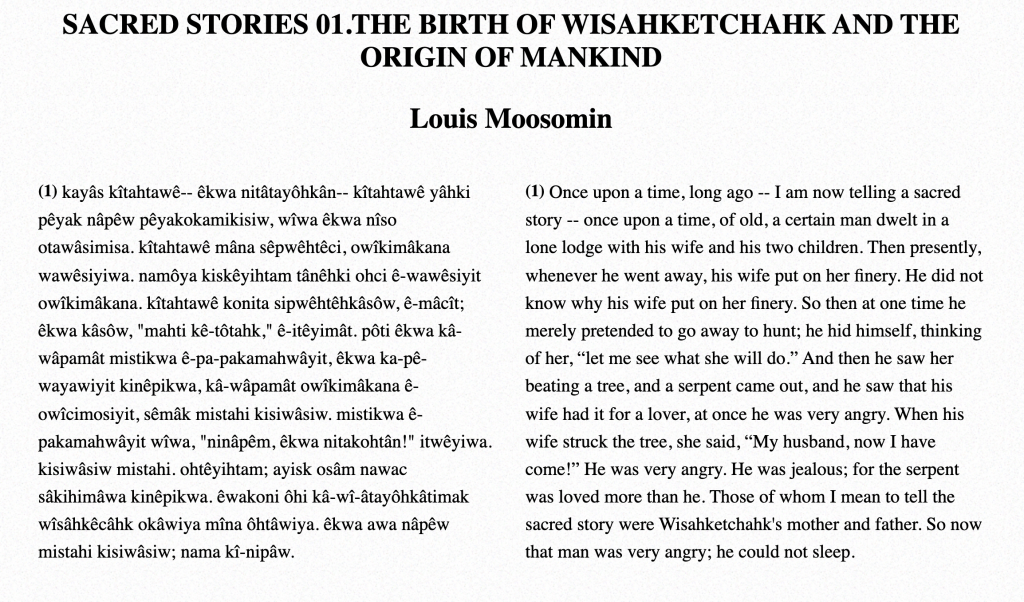 Congratulations to Aaron Fay whose commitment to learning the Cree language, coupled with some heavy-duty programming and presentation skills, have now brought us a complete, online, parallel English-and-Cree presentation of Sacred Stories of the Sweet Grass Cree, and Plains Cree Texts, collected and published by linguist Leonard Bloomfield. Aaron’s new presentation (illustrated by the photo above) can be viewed online at https://bloomfield.kiyanaw.net/ (the remainder of the website is currently under development).

This new presentation of the texts represents yet another leg in a marathon of collection and preservation that began nearly a hundred years ago on the Sweetgrass Reserve, when Bloomfield was commissioned by the National Museum of Canada to record stories from a patient and generous handful of master speakers and storytellers. We know their names from Bloomfield’s notes; thanks to his work, we also know their stories in their own words.

Bloomfield also acknowledges supporting contributions to his interpretation and analysis from Harry Watney [? Wuttunee], Norman Standinghorn and Baptiste Pooyak. The only photograph of the Cree contributors I’ve located to date is one of Pooyak with his family in the collection of the Archives of Saskatchewan.

Both of Bloomfield’s collections were published in the 1930s, and are now in the public domain, free of copyright restrictions. Although there were recording devices available at the time (wire recorders and wax cylinders), Bloomfield chose to record the stories by hand, writing them down word by word from the live dictation. For those of us who struggle to transcribe audio recordings these days, Bloomfield’s precision in transcription is beyond remarkable.

Because both books are in the public domain, both have been scanned for public access online at the Internet Archive, and can be viewed at these links:

In his introduction to Plains Cree Texts, Bloomfield describes them as follows:

“The texts here presented were obtained during the summer of 1925 for the National Museum of Canada (Department of Mines), Ottawa, Canada. Thirty-six of the texts obtained on this trip have appeared as Bulletin Number 60 of the National Museum, under the title, Sacred Stories of the Sweet Grass Cree (Ottawa, 1930). The collection now before the reader consists of forty-six tests obtained by dictation during a five weeks’ stay on Sweet Grass Reserve (Battleford Agency, Saskatchewan); the texts published in the above- mentioned Bulletin were obtained at the same time and from the same informants.”

Aaron Fay’s new presentation of the work carries forward a dataset shared with him by the University of Alberta’s AltLab and its SSHRC-funded project, “21st Century Tools for Indigenous Languages.” AltLab acquired the Bloomfield dataset from University of Manitoba Linguistics Professor Kevin Russell whose work with Cree goes back to the 1980s and the early days of personal computers. Russell’s work is based on the database of Bloomfield texts created in the 1970s, in an early adoption of computational linguistics by the University of Manitoba’s Cree Language Project. In those early days of computers, data entry involved feeding decks of IBM punch cards into the university’s one-and-only mainframe computer (then walking away – maybe overnight – while the computer did its thing). Conversion from Bloomfield’s spelling to SRO began with that punch card input, but was fairly straightforward because of Bloomfield’s tremendous consistency in the writing system he created for the books. The creator of the database at UofM had been among those who gathered in 1970 to create a standardized spelling system for Cree, and began immediately to honour that commitment. During my own years with the Cree Language Project, I was tasked with transferring the database from mainframe to PC. I later spent many hours keyboarding Bloomfield’s English translations to supplement the existing Cree-only database.

The images below capture a snapshot of the evolution, from the Bloomfield’s own red ink amendments of his original transcriptions, to the lead type used by the King’s Printer in the 1930s, to the 1970s vintage computer file (created before computers had lower case or diacritics), to this newest online presentation. 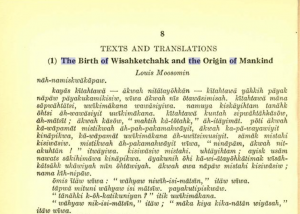 Louis Moosomin's first âtayôhkan, the opening text of Sacred Stories of the Sweet Grass Cree, extracted from the Internet Archive. 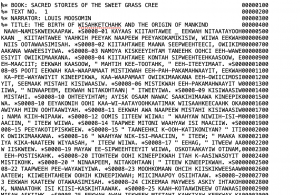 Extract from the mainframe database of the Cree Language Project, created before computers had lower case, or diacritics. 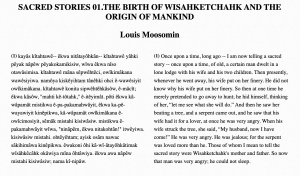 Anyone who makes the effort to learn to read deserves reading materials that reward that effort. Texts like these, which restore both language and culture from nearly a century ago, may be the best possible reward for those who make the effort. Thanks again, Aaron, for packaging them a manner we can all access and enjoy.