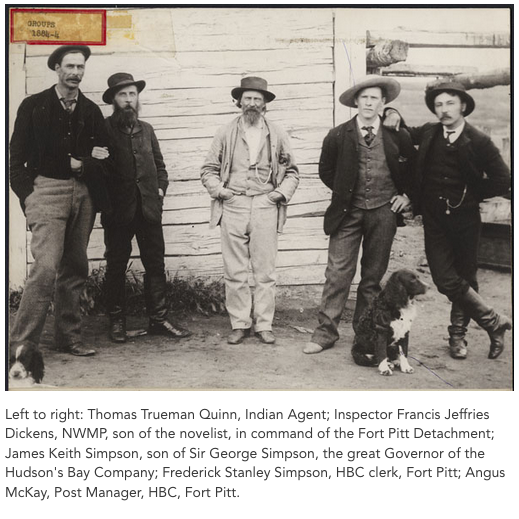 Peter Turner’s Twitter thread dated 1 April 2021 addresses a shameful piece of Canadian history that too few of us know. It’s tied to the starvation policies of Sir John A MacDonald, and it provoked a deadly response from Wandering Spirit (kâ‑papâmahcâhkwêw) and other members of Big Bear’s band that we might view as heroic in that context. I’ve assembled the thread and share it here with Peter’s permission. @sakwahtamow

In the days leading up to April Fool’s Day, Indian Agent Thomas Quinn invited First Nations band members to his ration house, where and when he promised to restore rations to the people who had been held restricted in starvation. On, April 1st, 1885, Quinn has quite the laugh.

Sorry for this dark cloud on an otherwise entertaining day of tomfoolery, but it’s like colonizers go, “let’s wreck every single thing for Indigenous People.”

These leaders ‘stormed’ the Indian Agent’s residence and ‘raided’ the ration house, where their Treaty provisions were supposed to be stored. Quinn and associates had already hauled provisions away to ensure starvation. Finding nothing at all, the return prank turned more serious.

The execution of Thomas Quinn followed swiftly, with the commencement of the ‘Frog Lake Massacre,’ a precipitated response to breech of Treaty which colonizers have tried in earnest to associate with the Batoche Resistance ever since #1885, although FN sympathized with Métis.

Big Lie Day was a reaction to something much more insidious and intolerable. For too long the devastation of John A. MacDonald’s policy has remained untold, while the reactions of the target of that infliction have remained spectacles of fantasy – even legitimizing continued genocide.

Historians and anthropologists remember and commemorate this tragedy as #FrogLakeMassacre but for the descendants of survivors, this was the aftermath of a callous insult known as #BigLieDay.

Thanks also to Charlie Venne, for sharing his grandfather’s name for the day:  kithāskīwi kīsikāw – April Fools Day (literally lying day). Click through to Charlie’s post to hear pronunciation: https://firstnationstories.com/?p=4052