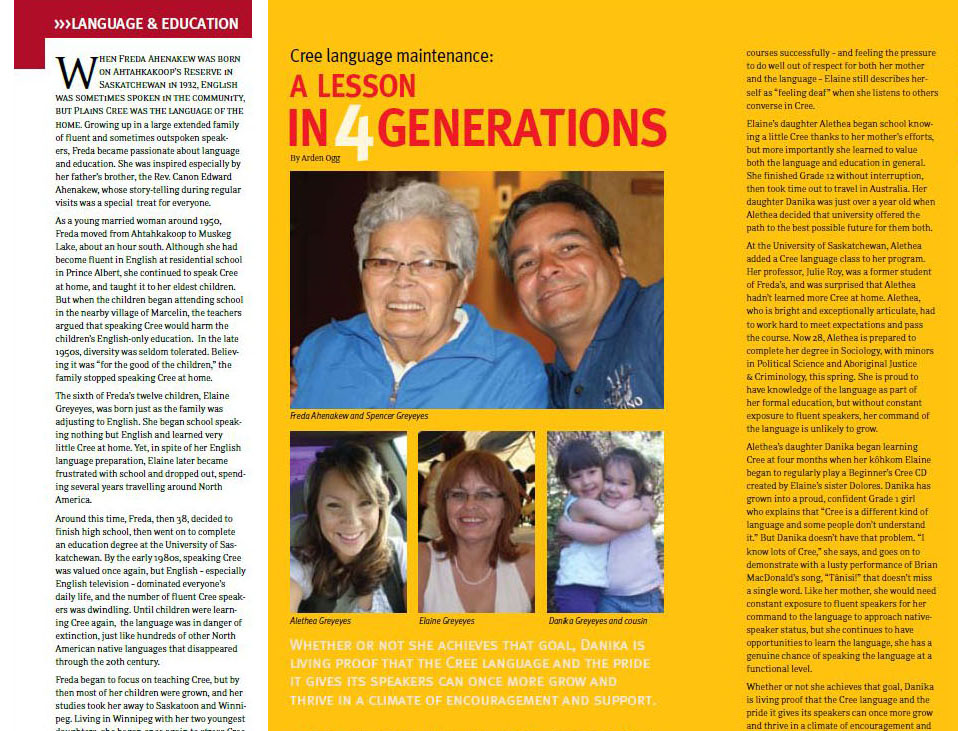 This 2011 piece, published in SAY Magazine’s University and College Guide 2011, might be worth sharing again. I wrote it to show how – with all the best intentions – the language can be lost within a single generation, and the generations of work it can take to recover.

When Freda Ahenakew was born on Ahtahkakoop’s Reserve in Saskatchewan in 1932, English was sometimes spoken in the community, but Cree was the language of the home. Growing up in a large extended family of fluent and sometimes outspoken speakers, Freda became passionate about language, education. She was inspired especially by her father’s brother, the Rev. Canon Edward Ahenakew, whose story-telling during regular visits was a special  treat for everyone.

As a young married woman around 1950, Freda moved from Ahtahkakoop to Muskeg Lake, about an hour south. Although she had become fluent in English at residential school in Prince Albert, she continued to speak Cree at home, and taught it to her eldest children. But when the children began attending school in the nearby village of Marcelin, the teachers argued that speaking Cree would harm the children’s English-only education.  In the late 1950s, diversity was seldom tolerated. Believing it was “for the good of the children,” the family stopped speaking Cree at home.

The sixth of Freda’s twelve children, Elaine Greyeyes was born just as the family was adjusting to English. She began school speaking nothing but English and learned very little Cree at home. Yet, in spite of her English language preparation, Elaine later became frustrated with school and dropped out, spending several years travelling around North America.

Around this time, Freda, then 38, decided to finish high school, and went on to complete an education degree at the University of Saskatchewan. By the early 1980s, speaking Cree was valued once again, but English – especially English television – dominated everyone’s daily life, and the number of fluent Cree speakers was dwindling. Until children were learning Cree again,  the language was in danger of disappearing just like hundreds of other North American aboriginal languages had disappeared through the 20th century. Freda began to focus on teaching Cree, but by then most of her children were grown, and her studies took her away to Saskatoon and Winnipeg. Living in Winnipeg with her two youngest daughters, she began again to stress Cree at home. And persisted in encouraging the rest of her family whenever she could.

With Freda in university, Elaine, then 28, returned to Muskeg Lake to care for her ailing grandfather, and decided at the same time to finish high school. She did all she could to teach her children the Cree she knew, gradually learning a little more from her Moshom. She took one of her mother’s Cree language classes at the nearby Mistawasis First Nation, eventually entering the Gabriel Dumont Institute’s certificate program in Human Justice, offered in Prince Albert through the University of Regina. At the University of Regina, she completed the Bachelor of Human Justice degree.

Elaine’s daughter Alethea began school knowing a little Cree thanks to her mother’s efforts, but more importantly she learned to value both the language and education in general.  She finished Grade 12 without interruption, then took time out to travel in Australia. Her daughter Danika was just over a year old when Alethea decided that university offered the path to the best possible future for them both.

At the University of Saskatchewan, Alethea enrolled in Cree language courses. The professor, a former student of Freda’s, was surprised that Alethea hadn’t learned more Cree at home. Alethea, who is bright and exceptionally articulate, had to work hard to meet expectations and pass the course. Now 28, Alethea is prepared to complete her degree in Sociology, Political Studies and Native Justice this spring.

Alethea’s daughter Danika has grown into a proud, confident Grade 1 girl who explains that “Cree is a different kind of language and some people don’t understand it.” But Danika doesn’t have that problem. “I know lots of Cree,” she says, and goes on to demonstrate with a lusty performance of Brian MacDonald’s song, “Tânisi!” that doesn’t miss a single word.

Danika is living proof that the Cree language and the pride it gives its speakers can once more grow and thrive in a climate of encouragement and support. It hasn’t happened quickly or easily, but the work of many dedicated individuals has begun to restore the Cree language to its proper place in Canadian society.

Supporting efforts like this is the main purpose of the Cree Literacy Network (http://www.creeliteracy.org) whose goal is to develop a library of bilingual Cree/English language and cultural materials that can be used and shared by Cree speakers and learners of all ages from the foothills of the Rockies to the shores of James Bay.

Arden Ogg is director of the Cree Literacy Network (http://www.creeliteracy.org). Freda Ahenakew, CM, SOM is one of its two honorary founders. Elaine and Alethea Greyeyes are energetic supporters. Danika is a member in training.