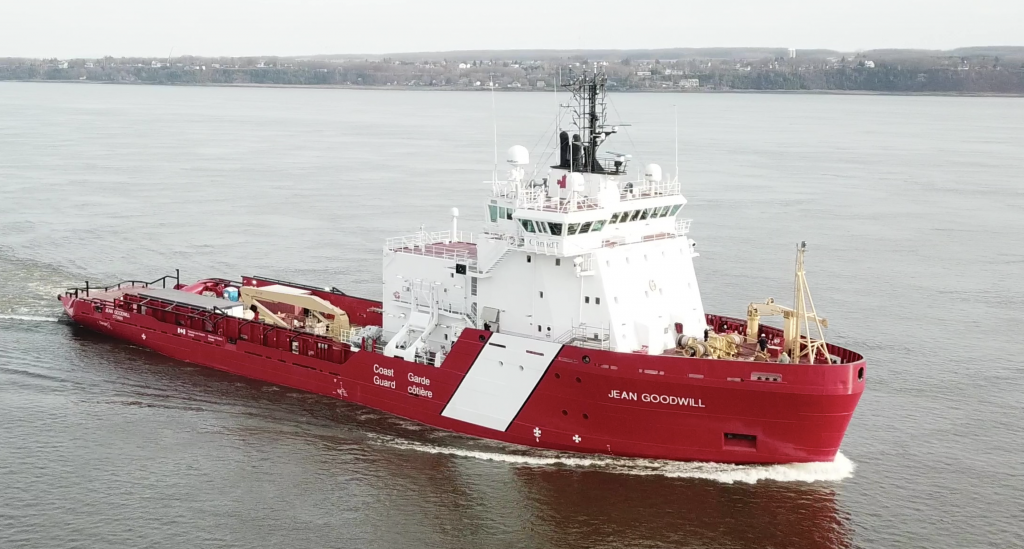 The Canadian Coast Guard recently remembered the late Jean Goodwill by christening an icebreaker in her memory (described in the attached YouTube video). Saskatoon Star Phoenix columnist Doug Cuthand – who shares a family connection with the late Goodwill – wrote about the dedication event that he attended on August 25, and gave us a clearer picture of a Cree life, well lived. Cuthand’s article is quoted below.

“As I learn about the legacy of Jean Goodwill, what she meant to her community, to First Nations across the country, and Canadians, having her honoured on a Canadian Coast Guard icebreaker is a fitting tribute to her legacy. Just as she blazed many trails in her life in founding Indigenous health associations and leaving such a positive mark on everyone she met, this vessel will blaze a trail in the ice to help mariners from all walks of life.”
The Honourable Joyce Murray, Minister of Fisheries, Oceans and the Canadian Coast Guard,

The CCGS Jean Goodwill is a medium class icebreaker that has already seen work in the Arctic, almost traversing the northwest passage last year.

SYDNEY, Nova Scotia — Thursday was a special day for the Goodwill, Tootoosis and Cuthand families.

Our aunt, sister and sister-in-law, Jean Cuthand Goodwill, was honoured in a special ceremony when a Canadian Coast Guard ship in her name was dedicated to service. Wayne Goodwill, Eric Tootoosis and I represented our families at the ceremony.

Jean’s mother died shortly after she was born. My grandparents, Jose and Harriet Cuthand, adopted her and raised her on the Little Pine First Nation. Her father was John Tootoosis, a longtime and influential Indigenous politician.

Jean attended the day school on the Little Pine First Nation and after Grade 8 went to Saskatoon to attend Bedford Road Collegiate. While she was in the city, she contracted tuberculosis and was sent to the sanatorium at Prince Albert. She got her Grade 12 there, and after she was discharged, she attended nursing school at the Holy Family Hospital in Prince Albert, graduating in 1954.

My grandmother was a midwife and medicine woman. She birthed many of the babies born on Little Pine and some on Poundmaker. She also was familiar with the plants and herbs and created medicines to fight a variety of diseases. No doubt her influence, coupled with that of the nurses in the San, contributed to Jean’s interest in pursuing a nursing career.

She worked for a short while in the hospital, but soon applied to National Health and Welfare to be part of the medical services branch that provided health-care services for status Indians.

Jean was placed in charge of the nursing station at La Ronge — it was quite a jump for a nurse fresh out of school to be placed in charge of a clinic. She had a nurse’s aide, Alice Keighly, plus medical transportation and maintenance services from Arther Sanderson.

This was the first all-Indigenous staffed nursing station in Canada.

While Jean and Alice were supposed to serve the Indigenous community, La Ronge was a mixed community with Metis and settler residents. She was the first responder for the whole community in addition to birthing babies, treating accidental injuries and disease, and removing fishhooks from American tourists.

After about five years, she was exhausted. The workload was simply too much, so she sought work elsewhere. That turned out to be a hospital in Bermuda, where she was able to continue her profession and get some rest.

Meanwhile, Jean had reunited with her Tootoosis family; as she said, she was blessed with two families.

In 1965, she married Ken Goodwill from the Standing Buffalo First Nation in Saskatchewan.

When she returned to Canada, she joined the federal civil service and worked for Indian Affairs and the Secretary of State.

In 1981, bureaucrats in the medical services branch of Health Canada made deep cuts in the delivery of services, setting off a firestorm of opposition from First Nations communities. In an act of reconciliation, the cuts were later reversed and Jean was hired as a special advisor on First Nations health issues.

She realized she had an opportunity to create some lasting change. Jean worked to develop health clinics on reserves, and after a protracted battle, the department began to see the value of providing health services in the local communities. Today, almost every First Nation has a health clinic.

Jean remained humble and never gave up building better health programs. She helped create the Indigenous Nurse’s Association of Canada, and worked with Dr. Una Evans at the University of Saskatchewan to develop the Indian and Inuit access program for nursing.

Jean received the order of Canada and an honorary doctorate from Queens University. She was also strong in her culture and traditions; she and Ken were part of the summer powwow trail.

The Canadian Coast Guard Ship (CCGS) Jean Goodwill is a medium class icebreaker that has already seen work in the Arctic, almost traversing the northwest passage last year. The icebreaker will also clear sea lanes in the Gulf of Saint Lawrence.

The Jean Goodwill is aptly named and will continue to work as a protector and provider of aid, just like her namesake.