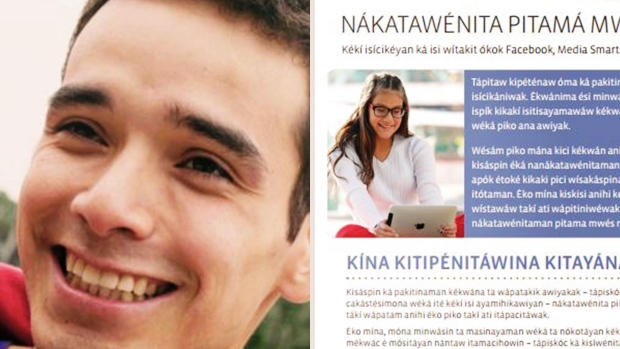 Amidst all the excitement of a CBC aboriginal news story, “facebook-launches-youth-safety-guide-in-cree-ojibway-and-inuktitut”(and more genuinely deserved acknowledgement of the wonderful Michael Champagne), it took a little work to locate the real goods. One new (potential) motto of the Cree Literacy Network: “Show me the Cree!” (I need somebody’s help to translate!)

Here is Mediasmart’s own announcement of the multilingual resources:

Here is the link to the APTN-produced Cree language resources:

(I notice that this translation is in the n-dialect (Swampy Cree, Mushkegowak) as spoken in Manitoba. The long vowels using the acute accent are a style mark I know through CLN board member Ken Paupanekis, a master speaker and teacher of the n-dialect at University College of the North and University of Manitoba).

I may be mistaken, but I think this is the English “Think Before you Share!” piece on which the piece is based:

And you can even download guidebooks and posters:
http://mediasmarts.ca/tipsheet/think-you-share

Some additional pieces I found about this resource:

1: Via Shaneen Robinson at APTN:

Today, Facebook, MediaSmarts and Aboriginal Peoples Television Network (APTN)N released a series of newly translated guides for Aboriginal teens, which provide tips for sharing and making decisions online. The Think Before You Share guides were released in Winnipeg during the opening of the National Centre for Truth and Reconciliation at the University of Manitoba.

Like most young Canadians, Aboriginal youth rely on social media to keep in touch with family, friends and their broader communities. In remote areas, social networking is an especially important platform for communication. Young people depend on these networks for sharing, whether it’s their thoughts, photos or their latest favourite video.

In MediaSmarts’ Young Canadians in a Wired World (YCWW) study we looked carefully at the habits and attitudes youth have towards sharing things online, as well as their worries, bad experiences and strategies for avoiding problems and fixing things when they go wrong. Our findings, along with the best international research on how youth share and make decisions online, provided the basis for a guide developed in 2013 by MediaSmarts and Facebook. The Think Before You Share guide has since been translated into over a dozen languages and released in Singapore, Czech Republic, Hungary, Poland, UK, and India.

The guides offer teens advice on safe, wise and ethical online behaviour. Research shows young people prefer to deal with online issues socially, rather than relying on technological tools. That’s why the guides recommend dealing with unwanted sharing by talking to the person responsible offline. They also give young people tips for dealing with “hot” emotional states like anger or excitement that can lead to making bad choices about sharing things online, and remind them to turn to friends, family and other trusted people in their lives for support if things go wrong.

Young people want to make good decisions about sharing online. With the Think Before You Share guides they have the tools they need to do just that.