Cree language facts for editors of English and French: The Cree Language Family 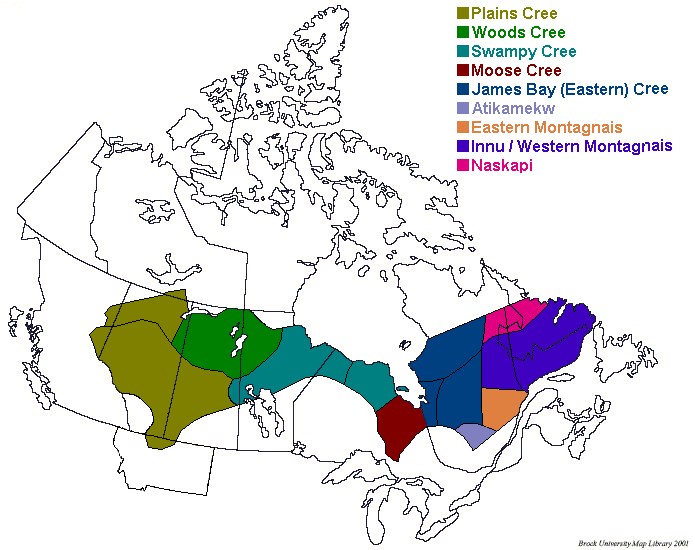 This article written for the Language Portal of Canada was originally published on 17 June 2013 (it was also translated into French for that site). Since it is no longer available online, I am reproducing it here.  Special thanks to Charlie Lippert for updating his Wikipedia map to reflect our understanding!

The increasing emergence of Aboriginal languages into the mainstream is a positive development in Canada’s multicultural evolution, but for editors of texts in English and French who encounter a language such as Cree, it can present a serious challenge.

For English and French, style guides such as The Chicago Manual or Le Ramat provide written precedents for almost every situation. The Oxford English Dictionary and the Larousse represent centuries of dedicated lexicography. For Cree there is no authoritative style guide, nor is there a single dictionary that covers the complete spectrum of variants. Here’s why.

Fact: The term “Cree” defines both a language and a whole family of languages.

The term “dialect” is often used for the various distinct forms that Cree may take. This usage is shared by almost everyone who speaks Cree, English or French, but linguists agree that they are, in fact, separate languages1. Neighbouring languages within this continuum may be as closely related as English is to Dutch, or French to Italian. Within the vast geographical swath between the Rockies and Labrador, the deepest divide aligns roughly with the provincial boundary between Ontario and Quebec.

The most accurate current representation of Cree variants is shown on the map above [it can be found in Wikipedia]. From Ontario west to the Rockies, the map divides the language into four main subgroups: Plains Cree, Swampy Cree (called “Mushkegowuk” in some communities), Woods (Woodlands or Rock) Cree, and Moose Cree. Some speakers recognize a further subdivision of Plains Cree into southern and northern variants. The most common label that speakers in the west use to refer to their language is, simply, “Cree.”

In Quebec and Labrador, subdivisions include Innu-Aimun (the contemporary name for Montagnais and Naskapi), Atikamekw, and Northern and Southern variants of James Bay Cree (also known as East Cree). As in the west, many eastern speakers also refer to their language simply as “Cree.”

The editor’s first responsibility is to determine which member of the Cree language family is being used. If it seems confusing, consider that all these labels were first applied to the language not by the speakers themselves, but by outsiders—ultimately passing into English from French. It’s a little like Columbus referring to indigenous North Americans as “Indians.”

Fact: Reliable contemporary dictionaries for many varieties of Cree are readily available.

Often, misconceptions drive a laisser-faire attitude towards Aboriginal languages in print. The most common of these? “It doesn’t really have a written form, just write it like it sounds.” Until the arrival of the printing press, and the emergence of authoritative dictionaries, the same description might have applied to English or French. With many variants of Cree endangered, Cree can’t afford the luxury of a slow evolution of writing standards. Editors encountering Cree words and phrases in English or French texts have a unique opportunity to help promote written language standards. They can begin to do so by making use of readily available resources, such as the following online dictionaries:

This article is about how SRO and Syllabics can be precisely equivalent in writing Cree. It is the third piece Dorothy Thunder and I have published through the Editors’ Association of Canada and the “Language Portal of Canada” — the federal government’s online information site for language professionals.

Through the Language Portal, we reach out (in English and in French) to “word nerds” of all varieties and offer them a taste of what it’s like to work with Cree. We hope these pieces are also helpful to students, teachers and speakers of Cree, showing the language through a slightly different lens.