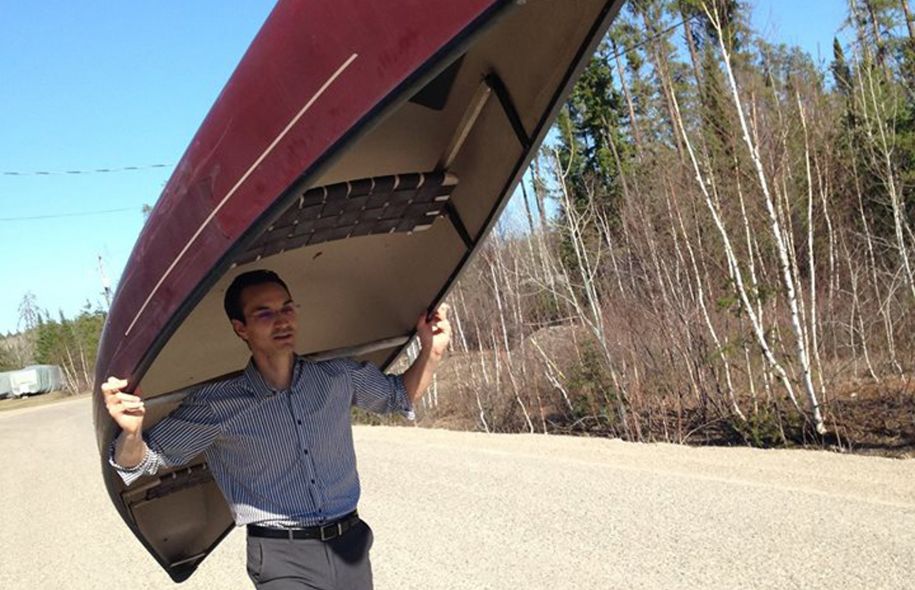 From the 21 August 2017 issue of Montreal’s Le Devoir, newspaper: a great piece by Marie Michele Sioui in which linguist Kevin Brousseau talks about Cree as a language continuum that stretches – without borders – from Alberta to Labrador. Bien fait, Kevin! kimamihcihinân!

The word “Cree” doesn’t exist in the Cree language. Neither does the name “Kevin”. Nevertheless, Kevin Brousseau is well and truly Cree, and passionate about their language, the most widely spoken Indigenous language in Canada.

A wink, an argument, a stance: to acknowledge the irony of his name, the linguist re-baptized himself “Kepin” on the blog he created to promote the use of Cree dialects and to share the stories and myths he has translated in them.[https://creelanguage.wordpress.com]

“In fact, “Kevin” is pronounced “kaybin”. They don’t have a “v” in Cree, so my grandmother would say Kepin,” says the 36-year-old, whom we met in Timmins, where he has been studying medicine for three years.

“My mother called me Kevin. I would suggest: if the Cree gave Cree names, we wouldn’t have the name Kevin!” he argues.

His mother, born in Waswanipi, preferred to speak more to her children in English than in Cree. “She went to residential school, and she made a decision – maybe consciously, maybe not – not to speak Cree to her children,” says the future doctor.

With his grandmother monolingual in Cree, the child was unable to communicate with her. He searched in dictionaries, moved in with her, and, in the course of time, he learned the language.

In the course of his interview with Le Devoir, given sometimes in English, and sometimes in French with just as much ease in one language as the other, the linguist is interrupted by his daughter. She speaks to him in Cree: he answers in the same language. “Since she was born,” they speak to each other in Cree, he emphasizes.

The Cree language is, in fact, “the Cree languages;” a series of dialects that create a continuum, a chain that stretches from Labrador all the way to Alberta.

In this chain, the speakers are those whom Europeans named Cree: the Innu (or Montagnais), the Attikamek and the Naskapis. Most of these people who, before they became sedentary and colonized, were displaced, interacted regularly, and referred to themselves using the terms Nehiraw and Iriniw.

See a map of Indigenous communities in Quebec here

Pronunciation of words has evolved today, and varies according to the dialects. In the dialect of Kevin Brousseau’s grandmother, the second word became iyiniw, a word pronounced as “Innu”!

As a result, “If you speak with my grandmother, who only speaks Cree, she will never say “Cree,” because she doesn’t know what you’re talking about,” says Kevin Brousseau.

She also knows the Obidjwan people very well, but not the word “Attikamek,” the name of the nation to which its residents belong. For the elder, all Indigenous people are “Iyiniw” (or “Innus”), becuase that’s the word that was used before the arrival of Europeans – and the only word that exists in her language.

“When people were placed in communities, they were separated from their families, separated from their cultural and ethnic ties. They adopted European terms. They said, Oh well, we are no longer Innus [Iyiniw], we are Cree. It’s a question of terminology: interactions with the colonial state.

To this day, in the Cree dialect continuum, neighbouring communities “tend to understand each other,” comments the linguist. “Between Waswanipi and Obidjwan, where it changes from Attikamek to Cree – if you use the European terms – we are actually speaking about dialects of the same language.”

On the other hand, if one made a jump of ten communities, “people wouldn’t understand each other any more,” he says.

According to the 2016 census, the Cree languages are the primary languages of 83,985 Canadians, making them the most commonly spoken of the Indigenous languages in the country. In 2011, they were the mother tongue of about 84,000 Canadians, reported between the provinces of Saskatchewan, Manitoba, Alberta and Québec, where 20% of the speakers live.

About these figures, Kevin Brousseau comments that Cree has lost ground to entertainment. “Parents spend more time watching television by satellite, more time on social media, and children do the same. They all spend much less time interacting with other people who speak their language,” he observes.

When they send texts, play video games or check their Facebook page, Cree people do it in a language that isn’t their own. And spelling in Cree is a problem, comments Kevin Brousseau, who concludes that “incoherent spelling systems make learning to read and write very difficult for the young.”

It is partly for this reason that he created his blog, to unify Cree spelling. On his website, the story of Hansel and Gretel is given in Cree syllabics. The “âtayôhkân”, or Cree myths, come alive in English. The story of Goldilocks sits side-by-side with that of Diver Duck.

A few expressions in Cree from the east coast of James Bay: