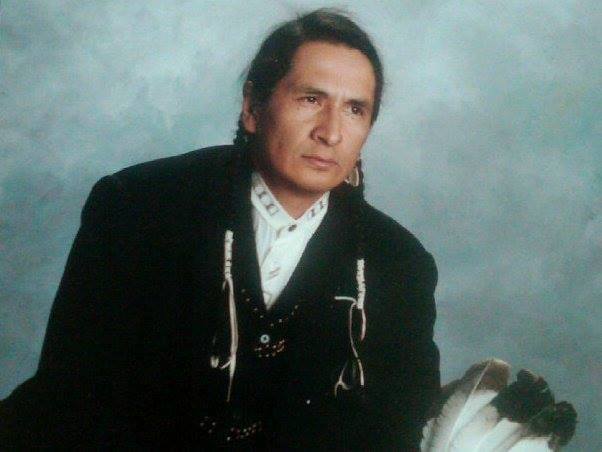 May he journey well and be welcomed with love by the ancestors.*

It’s hard to believe a year has now elapsed since the passing of this passionate and courageous keeper of Cree language and culture. Tyrone Tootoosis, Sr. left us on February 12th, 2017. As his friends and family prepare to feast his memory, we are grateful to acknowledge some of the vast legacy that Tyrone left for us.

Marius Paul, who attended university with Tyrone, passed on to us a Youtube Video that Tyrone created in 2012. The video consists of a collection of archival photos from Tyrone’s personal collection, and a dramatic narration in Cree, all labelled “Poundmaker”.

Although we at the Cree Literacy Network don’t know the precise details that surrounded the creation of this video, several members of our network have worked together to transcribe Tyrone’s words in SRO, and translate them into English. They are presented here along with the video for the benefit of those who would like to hear Tyrone’s voice and read along. A syllabic transliteration of the text also follows, along with a section from Norma Sluman’s 1967 dramatized Poundmaker biography.

We hope through this gesture to pay tribute to Tyrone’s importance as a cultural educator and language keeper. We also hope to help further share Tyrone’s  tribute to his direct ancestor, pîhtokahânapiwiyin (Poundmaker), who was the brother of Tyrone’s own Great-great-grandfather, Yellow Mudblanket. Finally, we also hope to create yet another small tool to support literacy in the Cree language and culture that Tyrone valued as highly as we do.

Reviewing the English translation, one member of the CLN observed that the text had an striking resemblance to the phrases often quoted – in English – as the final words of Poundmaker. The source of those words was identified as Norma Sluman’s 1967 biography, which she herself calls a dramatization. While we can’t know what Poundmaker actually said word-for-word in Cree, we do know that, like Norma Sluman, Tyrone had access to oral history about Poundmaker from John B. Tootoosis and all the greatest living authorities. Tyrone would have read the Sluman biography, but would also have heard the story again and again – in Cree – directly from the elders of his home reserve. These versions of the story would certainly have shaped the words he spoke in Cree while portraying Poundmaker in the 1998 television mini-series Big Bear – and perhaps this is the real purpose for which he prepared this audio/video presentation.

“I have been called many bad things since that day with General Middleton, but it was the white men who said such things, not my own people and that is all that has mattered to me. They put chains on me and shut me away, but they did not cut my hair or keep me very long because I think they know in their hearts that I had done nothing wrong. I was sick at heart when I came home for I could see that it all must begin again. The long, long fight for a better life for us in this land that once was ours.”

No one moved or made a sound. Poundmaker was quiet for a while. The people were in the shade and he was standing in the hot sunlight. For a moment he had a strange feeling that he was all alone, then Crowfoot moved a little so he could see them all again. It must be the heat making him so tired. “It would be so much easier just to fold our hands and not make this fight, to say, ‘I, one man, can do nothing.’ I grow afraid only when I see people acting and thinking like this. We all know the old story about the man who sat beside the trail too long, and then it grew over and he could never find his way again. We can never forget what has happened but we cannot go back. Nor can we just sit beside the trail.”

He stopped speaking again. Sweat was beading his face and body. He looked again at the place where Crowfood sat but once again the sun was dazzling his eyes. He willed himself to go on. “Before the trouble came to our country I worked very hard to unite the Crees, but I know now that what I did was not enough. I know now that Blackfoot, Cree, Sarcee or Sioux – this does not matter any more. We must all become one people. Until we do that, putting aside old animosities, old jealousies, old rivalries, we will only help to subjugate ourselves. We will –”

He paused, trying to draw a deep breath and found that he could not. He could not go on, it was no use. He had to rest, to try to ease a hard pain that suddenly seemed to be exploding in his chest. Again he struggled for a breath but the pain was choking him and then somehow the earth moved and lurched hard against him and he struggled fiercely against it. the grass had closed over him and he felt it in his hands, that grass, so strong and green and good for the horses and buffalo to graze upon.

*With thanks to Arok Wolvengrey for helping me put this beautiful thought from Candyce Paul into the Cree words he and his ancestors deserve. Thanks also to Arok Wolvengrey, Jean Okimâsis, Solomon Ratt, Ben Godden and Dorothy Thunder for persisting through the sadness of this loss to assist with transcription and translation.