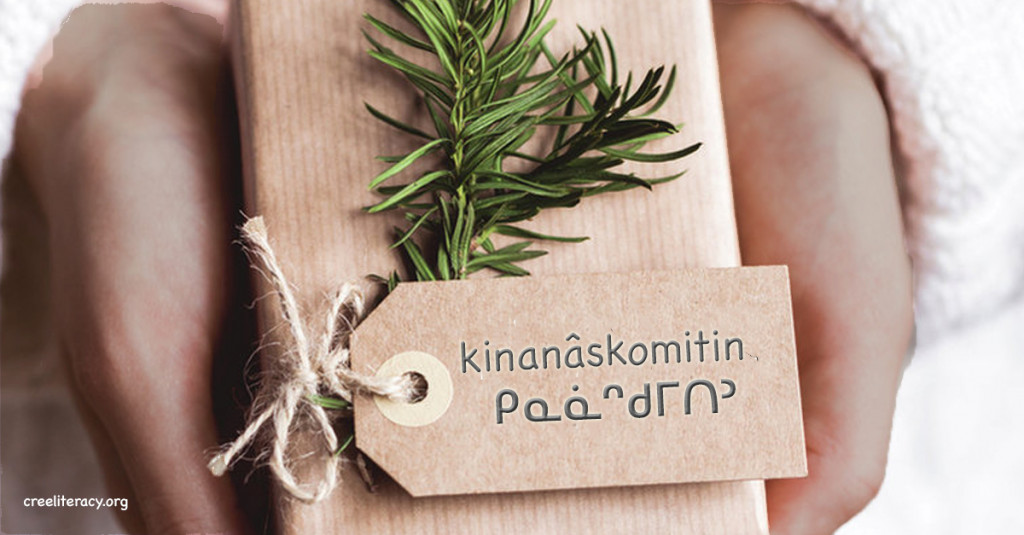 Thanks to Dr Kevin Brousseau for assembling these forms and sharing this overview. It’s interesting that what sometimes looks like regional variation turns out to be understood, and even usable all across the Cree dialect continuum, though, as always, community preferences may differ. Here’s what Kevin wrote (with some trivial adjustments to reflect the spelling style used here on CLN).

Someone recently asked about words of gratitude in #CreeSimonSays. Here is some information on the various words mentioned by people who chimed in.

There is no word in Old Cree that translates exactly to the word ‘thank’ in English. Instead, there are different ways to express gratitude, some of which are used throughout Cree country, while others are used only in certain regions.

ay-ay/hay-hay. This is a reduplication of the word ay, which as an exclamation used to gain someone’s attention in many dialects. It is also used as a noun in Old Cree and is found as a part of nouns in most modern dialects where it literally just means a ‘being’ or ‘thing’ and is also found in demonstratives and pronouns in some dialects, too. As an exclamation to get people’s attention, one can see how it came to be used to express gratitude in some dialects.

êkosi. This is literally a contraction of êko + isi (Old Cree êko + iši). This word, at least in the dialects in Ontario and Quebec, is used in jussive constructions and as a stand alone word roughly translating to ‘may it be so’ or ‘let it be.’ As such it can be used to express acquiescence or acceptance, hence its use to express gratitude in some regions.

kitatamihin. This is a verb based on the root atam-, which refers to pleasing somebody by some gesture. It is the same root used for the verb atamiskawêw, meaning to greet someone. In this form, kitatamihin means “you please me by your gesture” or something to that effect. This literally is a reduplicated form of kinaskomitin, which literally means “I consent to you” or “I approve to (what) you (say, do, etc.)” In this case, we consent or agree to being given something or for being helped. This way of expressing gratitude is used throughout Cree country, all the way into Quebec and Labrador.

ma(r)siy. This is a French loanword, from ‘merci.’ It literally means ‘thanks.’

mîkwêc. This is an Anishinabe loanword. In their language it is a contraction of ‘mî + gwech,’ which literally translates to ‘that is enough.’ Again, one can see how this came to express gratitude.

têniki/tîniki. This is an English loanword, from ‘thank you.’

wînâhkôma. This word appears to be used only in western dialects, so it may have had its origins as a loanword from a yet unidentified language. It was recorded in 1874 in Lacombe’s dictionary and is well-known in some communities. As an exclamation expressing gratitude, it can also form the verb wînâhkômamêw, meaning ‘he/she thanks him/her.’

Although Kevin is a medical doctor, we’re glad that he hasn’t been able to relinquish his passion for linguistics and for his own Cree language, centred in his home community of Waswanipi, Québec. In his “spare time” Kevin maintains four distinct Cree language blogs, all prepared with exquisite care, all designed to broaden our understanding of the Cree language as a whole, from the Rockies to Labrador, from Montana to the Northwest Territories.