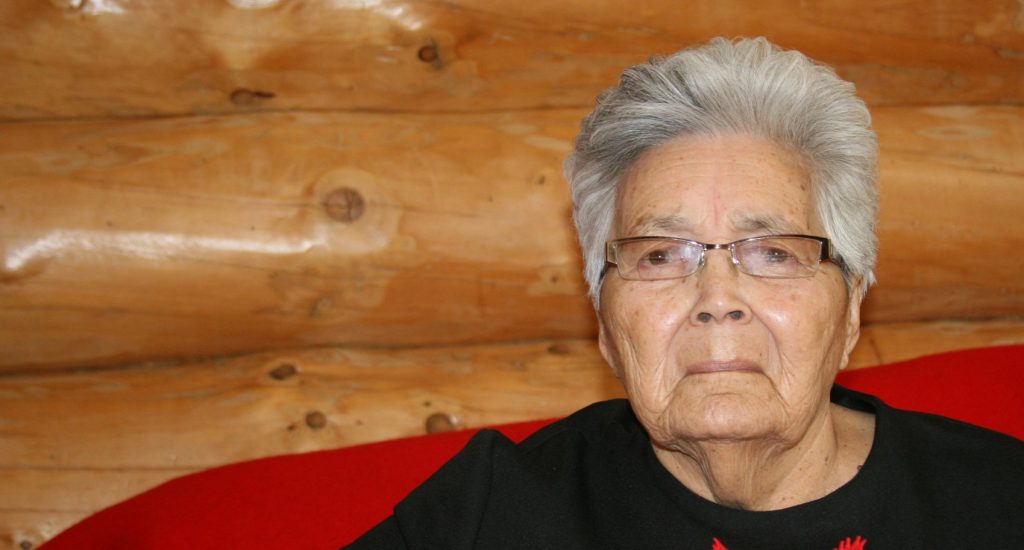 We all grieve the loss of our mother, our colleague and friend, Freda Ahenakew.

The northern lights were spectacular above Muskeg Lake Cree Nation on April 8, 2011 when Freda left us to join the ancestors. All of her family, friends and colleagues will miss her dearly.

Freda was born on Ahtahkakohp’s Reserve in Saskatchewan in 1932, the eldest of nine children of Edward Ahenakew and Annie Bird. The home was rich in Plains Cree oral tradition with children and adults listening together to gifted story-tellers. Freda was especially inspired by her father’s uncle, the Rev. Canon Edward Ahenakew, a gifted story-teller and writer in Cree and in English.

The Cree values of hard work, giving and humility were constants in Freda’s life, at school, on the farm, and raising children, but so was her commitment to the greater good. Children who had lost a mother – a family of 15, in one case, a group of her own nieces and nephews in another – were welcomed into her home and treated as her own for as long as help was needed. To this day, she is loved as a second mother by many. Family members say it never mattered how many people were in the house, there was always room for one more: just add another cup of water in the soup to make it stretch!

But Freda’s support of others extended well beyond her own home. She sought and received grants to teach life skills classes on the Reserve, such as well as sewing, cooking, nutrition and food safety. She helped found Muskeg Lake’s Al Anon program, and later ran summer cultural camps open to the community. Asked for help of any kind, she would quietly but unfailingly give whatever she could.

Having left high school unfinished, she seized the opportunity at the age of 38 to join her children on the school bus to Marcelin High School, where she graduated in 1969. Her very presence in the classroom demonstrated her commitment to education more effectively than words alone ever could. In 1979 she graduated from the University of Saskatchewan with a Bachelor of Education. With the guidance of Ida McLeod, she became a teacher of Cree.

Through her M.A. in Linguistics, completed at the University of Manitoba in 1984 under the guidance of H.C. Wolfart, she found a new way of reaching others through books that supported Cree language learners, but also offered invaluable windows into Cree culture for non-speakers through English translation. Through her University years and well beyond, she travelled as widely as possible through Saskatchewan and Alberta, recording the stories of elders, particularly women’s stories that had seldom been valued before.

Freda’s work with language and books has received much attention over the years. What has remained virtually unrecognized is the way in which Freda transmitted the values of hard work, giving and humility not through language or speech, but by listening rather than talking, and actions rather than words.

Throughout her travels, many hours and countless miles behind the wheel gave evidence of her deep commitment. On a moment’s notice, she would pack the car with kids and a few supplies, thinking nothing of the hours between Winnipeg and Saskatoon, or Muskeg and Hobbema. Sometimes, she would drive all night to arrive in time for morning classes or meetings.

Freda loved the time she spent with elders such as Sarah Whitecalf, to whom she offered continuing friendship, the opportunity to be heard, and living proof that the language and the old ways were still valued. Sarah, who was a wonderful speaker and story-teller, enjoyed tagging along with Freda whenever she could. The lectures Sarah gave at La Ronge in response to questions from contemporary students would never have happened without Freda literally bringing them together.

Family members were taught hard work by example, not only in the early years when she raised kids and baked daily bread on the farm without running water, but later, when she toiled at the kitchen table long into the night with a tape recorder and yellow note pad, transcribing in pencil the hours and hours of stories she had recorded.

As a University Professor, Freda’s work ethic and humility inspired both students and colleagues. While reams of text transcriptions were typed and edited, Freda’s deeply respectful partnership with H.C. Wolfart and tremendous patience with word-by-word, letter-by-letter linguistic analysis created a work environment where others were inspired to work as diligently. Some went on to adopt her passionate commitment to Cree language and culture as their own. Several of Freda’s former students have completed advanced University degrees, and taught Cree at University.  A small group of linguists and teachers whose lives she has touched have only recently founded a new non-profit group called the Cree Literacy Network, through which they plan to continue to pursue her goals.

Freda formed associations with other women, such as her First Nations Women Writers group, established in Winnipeg in the 1980s. Gathering other Aboriginal women with a passion for language and culture, she was the nucleus of a small group that provided mutual support for writing projects. Many of these women are now leading figures in University programs.

As Director of Saskatchewan Indian Languages Institute, and as Head of Native Studies at the University of Manitoba, Freda’s humility created an environment that encouraged and empowered staff. She became recognized as an art lover, and her office became a frequent stop for struggling Aboriginal artists, whom she would often support and encourage by buying the work they brought for her to see.

In spite of the stroke in 1996 that limited her ability to speak and stole much of her independence, Freda continued to teach by example until the very end. She accepted the devotion of her family with humility; they showed her that her example of hard work was not wasted; and, she continued to demonstrate her faith in them, giving acceptance and unconditional love.

(This biography, written by Elaine Greyeyes and Arden Ogg was originally prepared for use in the Sasipenita Project installation at Saskatoon’s Wanuskewin Centre, which opened March 24, 2011. The exhibit continues until July 4, 2011. Elaine Greyeyes is the sixth of Freda Ahenakew’s children. Arden Ogg is director of the Cree Literacy Network (https://www.creeliteracy.org), the purpose of which is to pursue Freda Ahenakew’s long-term commitment to publishing books in Cree for the use of students of Cree language and culture at all stages of learning.

How the Mouse Got Brown Teeth: A Cree Story for Children. Written by Ray Smith, Edited and Translated by Freda Ahenakew, Illustrated by George Littlechild. Saskatoon, Fifth House Publishers, 1988.

How the Birch Tree Got its Stripes: A Cree Story for Children. Written by Dean Whitstone, Edited and Translated by Freda Ahenakew, Illustrated by George Littlechild. Saskatoon, Fifth House Publishers, 1988.

kwayask ê-kî-pê-kiskinowâpahtihicik / Their Example Showed Me the Way: A Cree Woman’s Life Shaped by Two Cultures.Told by Emma Minde. Edited, Translated and with a Glossary by Freda Ahenakew & H.C. Wolfart. Edmonton: University of Alberta Press, 1997.

Another beautiful tribute to Freda, from Doug Cuthand of the Saskatoon Star Phoenix.