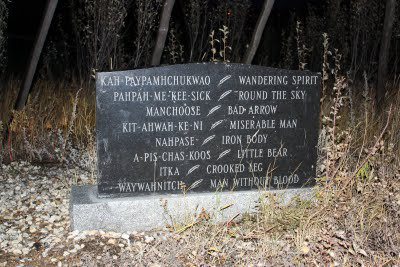 Lifted from Tyrone Tootoosis’s Facebook Feed:
(North Battleford, SK) This year marks the 127th Anniversary of the demise of Wandering Spirit, the War Chief of the Big Bear Nation in the late 1870’s who was hanged in 1885 at Fort Battleford for killing Indian Agent Thomas Quinn at Frog Lake, Saskatchewan. This information is a part of the written history of events that occurred during the time European settlers were making their homes on the prairies.
In First Nations culture, oral history is the traditional format in which stories of significance are passed down through the generations. On November 27th, BATC and Stoney Knoll First Nation extend an invitation to hear the oral history of Wandering Spirit, as told by Tyrone Tootoosis, featured speaker for the commemoration.
Other stories of significance to the area First Nations will be presented orally as well, as part of the agenda for the commemoration activities.
BATC and Stoney Knoll First Nation invite everyone to attend the commemoration which will be held at the Sweetgrass Community Centre followed by a traditional feast.
For more information, please contact
Chief Ben Weenie, Stoney Knoll First Nation Phone: 306 480 8570

Because Cree naming conventions don’t follow standard Cree language rules, not all of these names can be spelled confidently in SRO. Four of the names I’ve been given in SRO are:

For the use of those commemorating the events at Frog Lake and the important but painful role of kâ-papâmahcâhkwêw ‘Wandering Spirit’  (c.1845-1885), here is a list of readings from my personal archives.

Warning: Some of these writings were relatively contemporary to events, and reflect attitudes of “whiteness” that curl *my* môniyâw hair. These are historical documents, not my thoughts.

The treaties of Canada with the Indians of Manitoba
and the North-West Territories: Including the negotiations on which they were based, and other information relating thereto.
Morris, Alexander. Toronto: Bedfords, Clarke & Co, 1880. See p. 357; “Kah-pah-pah-mah-chahk-nay”; councillor of
“Chip-ee-wayan”; signed Treaty Six, Fort Carlton and Fort Pitt, 1876
Full text online at: http://peel.library.ualberta.ca/bibliography/940.html

The history of the North-West
Rebellion of 1885: Comprising a full and impartial account of the origin and progress of the war, of the various engagements with the Indians and half-breeds, of the heroic deeds performed by officers and men, and of touching scenes in the field, the camp, and the cabin: Including a history of the Indian tribes of north-western Canada, their numbers, modes of living, habits, customs, religious rites and ceremonies: With thrilling narratives of captures, imprisonment, massacres, and hair-breadth escapes of white settlers, etc.. Mulvaney, Charles Pelham (1835-1885). Toronto:
A.H. Hovey & Co, 1885. (see pages 90-94, 367; Travelling_Spirit; at Frog Lake, 1885)
Full text online at: http://peel.library.ualberta.ca/bibliography/1508.html

Department of Indian Affairs, Annual Report, 1885. xlii, xliii.
[Copies of the DIA Annual Reports are available through older University Libraries, where they are filed as “Government Publications”]

One final (and much newer) resource: a book titled “The Frog Lake Reader” by Myrna Kostash was published recently that gathers many of these stories into a single volume. It can be purchased in bookstores such as McNally Robinson (in Winnipeg or Saskatoon), or Audrey’s (in Edmonton) or ordered directly from the publisher Ne