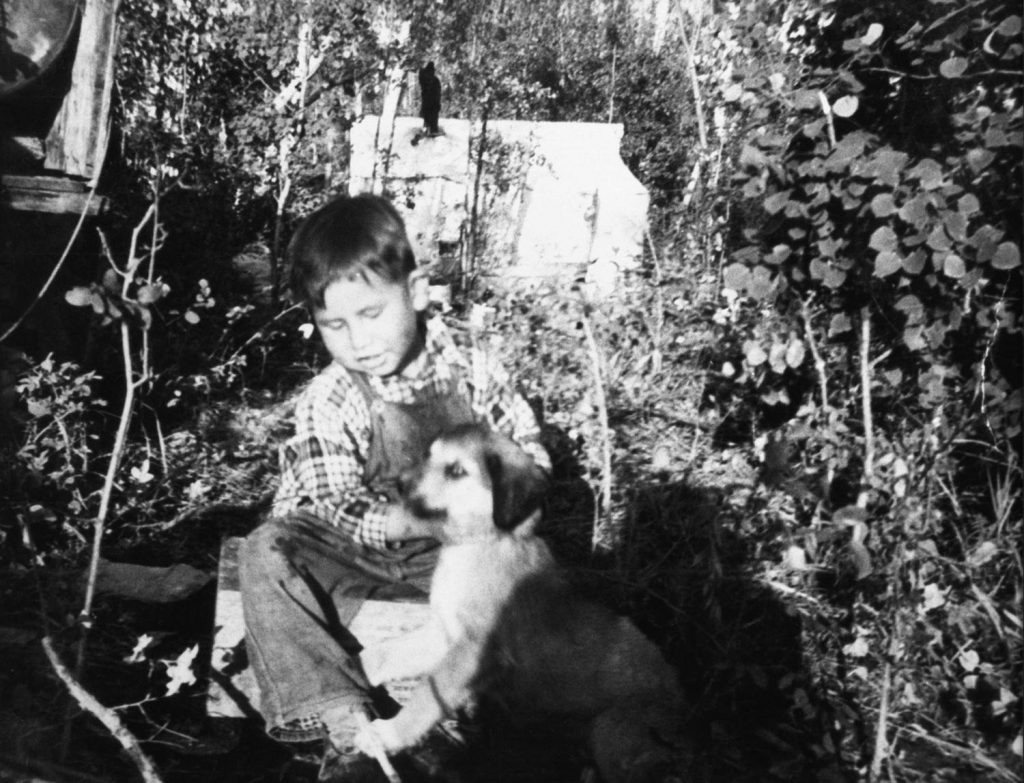 Thanks to Billy Joe Laboucan for allowing me to archive this âcimowin and photo about his childhood from his Facebook feed. (Now to get him to do more writing in Cree!)

Napees sat listening to the wonderful, almost magical sound made by the droning eighteen wheels zipping along the newly paved blacktop into the distance. A moment ago it had hurtled right by him, then in an instant it was just a pleasant drone, almost like a bee or fly bouncing around on a window, it’s buzzing slowly dying.

Napees got up from where he had been sitting in the shade enjoying the quiet and feeling somewhat lonely. He wandered back to the covered wagon. His father had bent willows into a round frame over the wagon box; then tied on which a canvas cover could be quickly thrown over and secured should it rain suddenly while traveling. He climbed onto the wagon seat and grabbed the ropes tied to the single tree at the tip of the pole, and yelled, “Aw right! Paddy! Mabel! Giddy-up!”

“Astam nîhtakosiy, ta-mîcisoyahk êkwa,” his mother called from the campfire where she had been cooking their evening meal. Napees did as he as his mother said that he was to get down from the wagon and eat supper.

“kipâpâpa êkwa kistês mâskoc kîkâc itikwê takosinwak. Mâka kakî-mâci-mîcison, nikosis.” His mother said in the Cree language, as she moved the big cast-iron fry pan away from the hot coals and into banked position further from the heat. Napees’ father and older brother would soon arrive from the working in the field picking roots for a white farmer. His mother said that he could start eating.

“It’s hot to be cooking. I’ll let the fire die down to a smudge.” She said. The fried moose meat with onions and garden fresh potatoes smelled so good.

“Mîcisotân: Let’s eat,” Napees said as he sat down on the grub-box. Although, they lived about six months of the year in tents Napees still could not sit on the ground too long without getting sore knees. They had moved from the trap-line in Bison Lake. After his father and brother had sold their furs in Peace River, they were moving to Nampa/Reno area to work for farmers clearing land for fields. In the fall, they would help with the harvest, using the horses to haul the hayracks topped with grain to the threshing machine, then back to the trapline but first they would stop at their main home at Gull Creek along the shores of Lubicon Lake.

Right now, they were camped in a small meadow wedged between a gravel road and the blacktop which had tall grass for the horses and a clearing to pitch up the tents. They shared a big to live in and another small one for storage or occasional company. It also made a great play area during the wet weather.

Just Napees and his mother were at the campsite. His older brother, Ichwach and two older sisters, Cheechich and Iskwees had been picked up by a supervisor to be taken to the residential school. Last time that he had seen his brother and sisters was last Christmas which seemed like a long time ago. As usual, he had been conveniently away someplace with one of his older sisters, either Gladys or Marina and sometimes by his grandparents when the mission officials would come to pick the others. He filled with happiness and happy thoughts of that soon-to-be reunion when they would come for the summer break, except this time, they would stay. They would all be together the whole year round!

Just then, a farm truck with a green grain-box with rattling chains and steel hooks turned into the campsite and stopped. Napees’s dad and older brother, Pichit climbed down from the truck. It backed and drove off in a swirl of dust.
“Daddy! You are here just in time to eat! Mom has just finishing cooking supper!” Napees shouted happily.

“I have to wash up.” Pichit said as he poured clean water into the washbasin. “It was hot and dusty as usual,” he said. He grinned, just his white teeth flashing on his dusty and sweaty face. “But it brings in the money!”

“We’ll move up there tomorrow and camp near the fields that we will be working on. We’ll pack tonight and travel while it’s still cool in the morning; easier on the horses.” Dad said as he took his turn at the washbasin and pulled his dusty shirt off and rolled up his summer-weight underwear. His corded forearms were a stark white compared to his weathered hands and face that had campfire smoke and elements had burned dark on the trap-line.

The next morning, after a quick breakfast of thick bacon and bannock washed down by strong tea, Napees had his with lot of condensed milk and sugar. Then they loaded up the wagon. There was still mist glistening off the green grass and bright colored spring flowers. The dogs keened a low sound that grew into excited barks as Dad tied them to their appointed spots in the shadow under the wagon.

“Kîyâm’pik!” Dad yelled; and the dogs quieted for a couple of minutes. Just long enough for him to jump onto the wagon seat beside Mom who held the rope to the W. It’s a rope laced through the rings on the side and bottom of the horse and looped through also through the rings on hobbles forming a W. Mom would bounce the nervous young gelding on its knees should it decide to run.

Pichit quickly hooked the last trace chains to the doubletrees behind the dancing heels of the young, tall horse my dad was currently training. But as we drove off slowly in the loaded wagon, everything went quiet, just the jingle of the harness and squeak of the iron rim of the wagon on gravel. Even the dogs were silent except for their panting and an occasional half-stifled yip. They liked to be on the move too. Pichit rode slowly along on his horse, Jim as we drove on the grassy side of the highway.

The black asphalt simmered into a mirage lake in the distance as the day heated up in the bright sun. “We’ll cool off in the lake up ahead!” Pichit teased and Napees half believed him. It did look like water but as they drove closer it disappeared. Then they turned onto a dirt road and searched for a good camping spot along the field where they would be working.

Later that night, they laid out their bedrolls inside the large tent complete with a small airtight heater for rainy weather. As they smuggled into the warm thick blankets, Napees said, “Mom, mahti âtayohkawin.” He always wanted to hear traditional legends, especially at bedtime. So he’d always asked his mother to tell him a legend or story.

Until he started school, Napees’s education was through storytelling from both his parents, grandparents and other members of his extended family. He would learn how to be respectful to people, animals and to the world around him. He would also learn that he belonged to Mother Earth and not the other way around.

In the fall, Napees would start day school. Then the rest of his older brother and sisters would finally be back home to stay. He was so happy about that! He would then have to speak English as well the ability to read and write. His dad said, “You have to learn the Whiteman’s ways and education so you won’t have to work hard on labour jobs all your life.”

Finally, the next day, a car stopped and out spilled his sisters and brother. They shared happy tears and laughter … and lots of hugs!

Almost 60 years later, as Kwancha Nâpew drove by that same spot at the junction of Range Road 210 and Highway 2 where he once sat by the newly paved highway, he still remembered those stories from his mother and his father’s advice. Now, it’s a different struggle, as he attempts to resolve a land claim from over 80 years. His dream is to have the community of Little Buffalo/Lubicon Lake work together in unity for the benefit of all.