From the January 29, 1921 issue of the Winnipeg Evening Tribune (held in the digital collections of the University of Manitoba Archives), comes a Battle Ballad written by Rev. Canon Edward Ahenakew, looking back on the First World War.

Ahenakew told the writer, Professor W.I. Allison, that the poem is based in fact, but takes some liberties with the truth. It a reflection on the service of two of Ahenakew’s cousins, James and Johnny Ballendine, both distinguished snipers, one of whom served at Givenchy in 1915. In fact, James Ballendine – whose rifle butt featured 36 notches in 1916, lived to tell the tale, though he carried shrapnel in his body for the rest of his life.

The fifth stanza is written in Ahenakew’s own Plains Cree, transliterated tentatively into SRO here with help from Arok Wolvengrey:

Freely translated in the article: “I had hoped – to see again – Saskatchewan, our own land, which I love. But it is the will of God to cut off my life, for His is the governing power.” 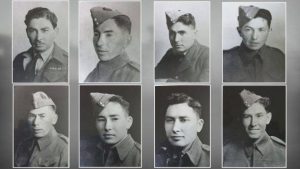 (You can click here to read the original article in its entirety. I’ve been selective here to exclude some of the writer’s self-serving superciliousness.)

Project Gutenberg hosts a e-text version of Canada in Flanders: the Official Story of the Canadian Expeditionary Force by Sir Max Aitken, MP (later Lord Beaverbrook). http://www.gutenberg.org/files/46114/46114-h/46114-h.htm in which Ballendine is described in Chapter 10:

July was a sniper’s month. True, every month is a sniper’s month; the great game of sniping never wanes, but the inactivity in other methods of fighting left the field entirely free for the sharpshooter in July.

It was during the fighting at Givenchy in June, 1915, that four snipers of the 8th Canadian Battalion (Winnipeg Rifles) agreed to record their professional achievements from that time forward on the wood of their rifles.

Private Ballendine, one of the four, is from Battleford. He is tall and loosely built. In his swarthy cheeks, black eyes, and straight black hair, he shows his right to claim Canadian citizenship by many generations of black-haired, sniping ancestors. He learned to handle a rifle with some degree of skill at the age of ten years, and he has been shooting ever since. At the present time he carries thirty-six notches on the butt of his rifle. Each notch stands for a dead German—to the best of Ballendine’s belief. One notch, cut longer and deeper into the brown wood than me others, means an officer.

The weapons used by these four snipers are Ross rifles, remodelled to suit their peculiar and particular needs. Each is mounted with a telescopic sight, and from beneath the barrel of each much of the wood of the casing has been cut away. The men do their work by day, as the telescopic sight is not good for shooting in a poor light. They are excused all fatigues while in the trenches and go about their grim tasks without hint or hindrance from their superiors. They choose their own positions from which to observe the enemy and to fire upon him—sometimes in leafy covers behind our front-line trench, sometimes behind our parapet. Very little of their work is done in the “No Man’s Land” between the hostile lines, for there danger from the enemy is augmented by the chance of a shot from some zealous but mistaken comrade. The mention of “No Man’s Land” reminds me that, on the Canadian front, this desolate and perilous strip of land is now called “Canada.” The idea is that our patrols have the upper hand here, night and day—that we govern the region, though we have not stationed any Governor or Resident Magistrate there as yet.

The next generation of Ballendines served in World War II: 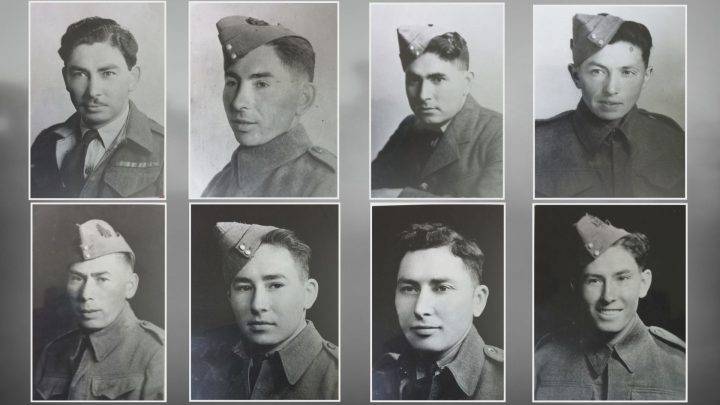 In the Battlefords this year, banners have been made to acknowledge 50 Indigenous veterans, including eight Ballandine brothers – sons of James or Johnny – who fought in World War II. Here’s