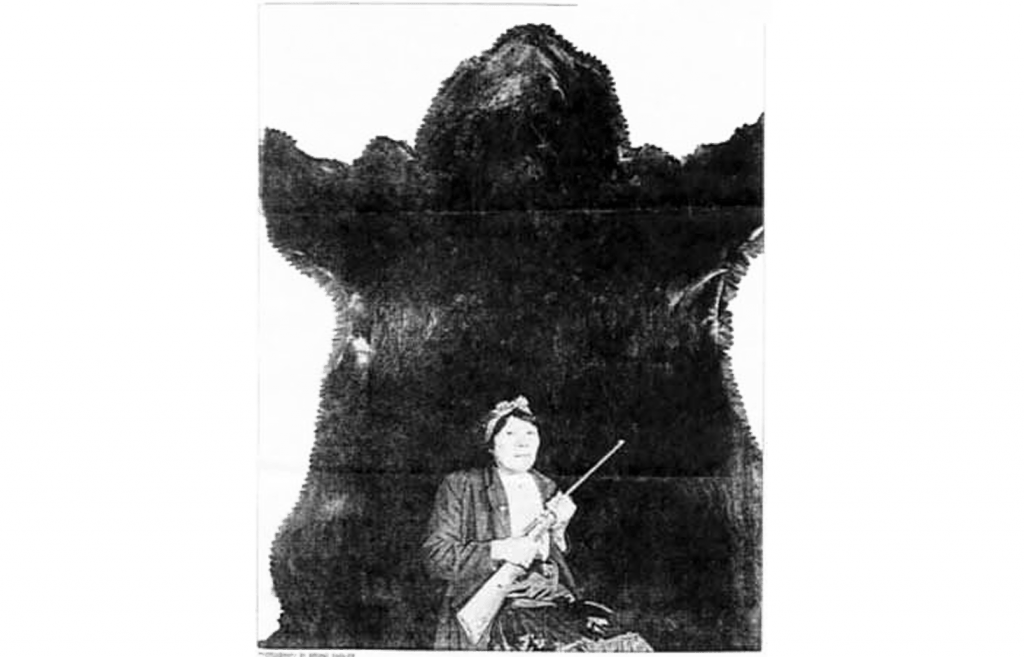 PrevYou Hold Me Up
SayItFirst Books in Cree: An up-to-the-minute catalogNext

Thanks to Chief Billy Joe for allowing us to share this story of nôhkominân in honour of International Women’s Day. His kohkom must have been a mighty woman. The image used here is another mighty kohkom whose story is added below Billy Joe’s. But first, here’s what Billy Joe says:

This is for all women: Happy International Women’s Day! We love you, we honour you; for without you, we would not be here. ay-hay!

nōhkom, Nora Sawan (neé Adams) was legally blind but she was able to distinguish light. She had glaucoma as a young person and she gradually lost her sight, but still, she sewed, though by feel, cooked, skinned and tanned hides. Not only was she an awesome cook, she was a midwife, a botanist, and was skilled in emergency situations.

I remember my mom cutting out moccasin patterns of moose hide and tying them together in packages for nōhkom to use later, as nimosōm needed them when he wore his pair out.

I’d go visit nōhkom and thread several needles for her as it would take her a long time to tread a needle by feel but she did it when alone. I’d thread various types such as glovers for thick hides and also twist sinew into thread; then, I’d sit and listen to her stories while watching her sew. She talked about when she was young, pausing to laugh at her own reminisces. She would always be faced towards me as she sewed by feel. I remember her distinct heavy durable stitches in nice even patterns.

My mother would tell us that she was an exacting teacher, demanding high quality work and setting out high moral standards. But I remember her as such a sweet and loveable kōhkomīnaw. She chewed snoose (Copenhagen, of course). All us little boys, my Sawan cousins in Bison Lake would line up for a pinch of it. She’d chuckle. And boy! Did we ever work for her and gladly too, hauling wood and water, or snow in the winter.

nicānak (my great-grandparents) were Louise Adams (neé Alook) who was Dené Soułine (ocīpwayānīw) and sōniyāw’nāk’siw, Alex Adams who had golden coloured hair, thus his name. Our great-grandparents were numbers 1 and 2 on the original Lubicon Lake membership list.

nōhkom’s older sister, Caroline Supernault (neé Adams) and nōhkominān were the only children in their family, (as far as I know). She had a heroic experience to survive, luckily for all of us that she survived that ordeal.

Big Granny, as we called her, ‘cuz there was also Little Granny (but that’s a different story…), lived along with Josephine, Dozer and Toodoy in a little log house a stone’s throw-away from us. She raised them when their mother died in a vehicle accident at an early age.

So naturally, being our other kōhkom, we spent a lot of time as their house playing cards with 22 bullets as markers; and telling stories. We spend a lot of time visiting with our cousins. I remember Big Granny would let us have a bit of tobacco for a cigarette; and then we bring her prairies chickens, rabbits, and sometimes mud hens which she liked… She knew a lot of stories too. And that was our entertaining education: our own internet and googling up the info from our ancestors.

My mother, Josephine was the first born in 1919, with 13 siblings to follow but with only five of them survived to adulthood and had families of their own. The second one in this Sawan family was my uncle, kisīnāpaw (Joe Sawan); then Sarah Cardinal (neé Sawan); Peter Sawan; and finally, Annie Sawan.

When my grandparents were old and everyone had their families to contend with, they still lived in Bison Lake where they had raised the whole family by ranching and later by trapping. They continued to live off the land.
During spring trapping, nimosōm would go trapping for mainly muskrats (wacaskwak) and beaver (amiskwak) and nōhkom would make drymeat, sew or cook.

One day, while nimosōm was out checking his snares, nohkom said that she heard a bear sniffing and snuffling from behind the log cabin. She got up and went into the house, securely locking the door. Then she got our the 12 gauge shotgun (or shottigun as she called it…) and loaded it and cocked it. She sat down to the left of the window that the bear would likely break. And sure enough, the glass imploded as the bear swiped it in; then its black form appeared blocking out the light.
When nōhkom thought the maskwa (bear) was half into window, she shot it and killed it. Then she grabbed it and dragged onto the middle of the floor; and started getting ready to skin it.

nimosōm was chuckling when he told us his version, he said, “kōhkomowāw had already skinned half the bear when I got home.” I asked her, “Where did you get the bear?”

She replied, “I killed it coming through the window,” and she kept on skinning.

I went hunting on google (unarmed) for a photo worthy of this story, and found yet another incredible story of a kohkom and a bear in northern Alberta, that you can read here. The photo above is Bella Twin who got herself a world record grizzly in 1953 with a .022!