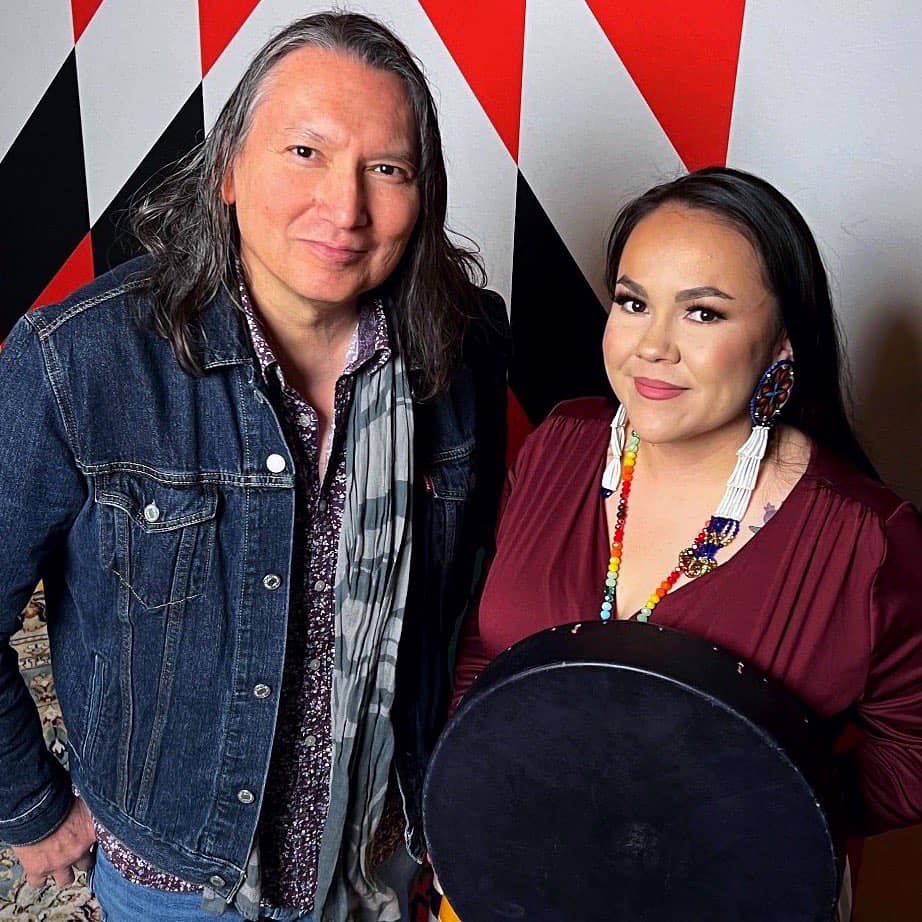 NCI’s David McLeod is well known among Winnipeg Indigeni for interviewing all the best guest celebrities, so I’m especially pleased he’s given permission to share these notes from his meeting with Fawn Wood, (allowing us to add our collective congratulations on her JUNO nomination). Here’s what Dave had to say:

Alberta based (Treaty 6 Territory), round dance and hand drum singer, Fawn Wood received great news in early March of her first JUNO nomination for her album Kakike (Buffalo Jump Records), in the Traditional Indigenous Artist or Group of the Year category. Kakike means “forever & always” and speaks to her love for her family & culture. For Fawn, being nominated in the new JUNO category means a lot, particularly as a woman who broke trail for Indigenous women within the pow wow community.

It was in 2006, Fawn made waves in NDN Country when she was honored as the first female to win the Hand Drum contest at the Gathering of Nations Pow-Wow, in New Mexico. She says a huge inspiration for her is giving Iskwewak (women) a voice, telling stories from their point of view,”Showing the beauty and empowerment that our Indigenous females hold – that matriarch energy.”

On Kakike, Fawn weaves songs of longing, hope and the joys of life that uplift the soul and heal the heart. She is joined by collaborators Dallas Waskahat (her husband), Charles Wood III, Tony Duncan and arranger/multi-instrumentalist Alan DiPerna.

“When I was a little girl, I heard a lot of cassette tapes of many different groups, and different singing within the genre I sing (round dance). And I never heard the female perspective. I never heard a song that was coming from a female point of view. So, when I started singing and composing music, I wanted to give a voice to our Indigenous women, to our stories. Within the round dance community we also have a lot of humorous songs too. They say humor is medicine too (smiles). I really like to share a song that will make you chuckle or something that hits you right in the heart. You know, one of those really hurtin’ tunes. I love to sing songs like that, making music others can relate to.”

Fawn’s voice has gained the media spotlight, in 2009 she sang “The Proposal” during the televised opening of the 11th Annual Native American Music Awards (NAMMYS). In 2010 along with Cree singer Dallas Waskahat, they opened up the APTN broadcast of Manito Ahbee’s Aboriginal Peoples Choice Music Awards in Winnipeg.

She acknowledges that part of her role is inspiring to up-incoming youth who are interested in traditional, or round dance music.

“When it comes to young people, there’s often an age where they’re exploring, they’re trying to find their identity. I witness them at gatherings, at pow wows, or round dances. There’s something special in the music that connects with them. I feel such a bright future for our music and language. It’s thriving, it’s withstood time already and made it this far. Traditional music is being shared a lot, it has a promising future, I really appreciate that.”

Fawn grew up with role models in traditional music as a child — her mother Cindy Jim-Wood (Salish), is a traditional singer. Her father Earl Wood is a Plains Cree singer. This led to several experiences that grounded her music, storytelling and role within the community.

“One thing that stuck with me as a little girl, my father said, you know what Fawn, you should really take the incentive to learn our language. Because, once you understand what your hearing, what your singing, it brings a whole new light and a whole new beauty to the music. He was right, it’s much more than what we speak or sing, it’s an Indigenous way of thinking and being. That’s the most beautiful part of revitalizing our language.”

Fawn was so inspired to learn her language, she earned a bachelor’s degree in the Cree language in 2017 at University nuhelot’įne thaiyots’į nistameyimâkanak Blue Quills in St. Paul, their current home base, located northeast of Edmonton.

“I’m privileged to come from a traditional musical family; it makes you understand how resilient our people are and how that warrior-like mentality and being was. Even though we weren’t supposed to be doing this (Between 1884-1951, the Indian Act outlawed traditional ceremony, including music), it was taken underground – but they kept those drums going, those rattles going. I keep that in mind every time I sing, it has become part of my holistic well-being.”

Through the pandemic, Fawn and her partner, Dallas, began “The Virtual Round Dance,” they’ve also been busy with their three children.

I asked her to share her view of the role round dance within the community.

“Round dance is grassroots, within our Cree people in Canada, the cool thing is that it is a celebratory dance, and there is also a ceremonial aspect, for our loved ones and ancestors. It’s also beginning to spread all over Turtle Island right now, throughout the U.S. and Canada. You don’t even have to have attended a round dance to enjoy it. We have round dances to celebrate community gatherings, graduations, weddings, memorials, any reason to come together and share beautiful music.”

Through music, Fawn inspires the connectivity with the ancestors, moving hearts and minds within this physical world as well as the spiritual.

“Whatever kind of intention or feeling we put into the music, that’s what you want people to connect with on a certain level – representing our Indigenous people is probably the driving force of why I do what I do.”

Fawn and Dallas were in Treaty One Territory, Winnipeg, MB, to record a one-hour radio special and video performance at No Fun Club studios as part of the sākihiwē music Thursday (props to Alan Greyeyes). On March 18th they held a workshop at Joe A Ross School and a free community concert on March 19th on the Opaskwayak Cree Nation OCN (MB). On the 20th, Co-Co Ray Stevenson invited them to a Winnipeg pow wow to recognize the Spring Equinox, they were received like rock stars!

Drum is heartbeat. Drum is community.